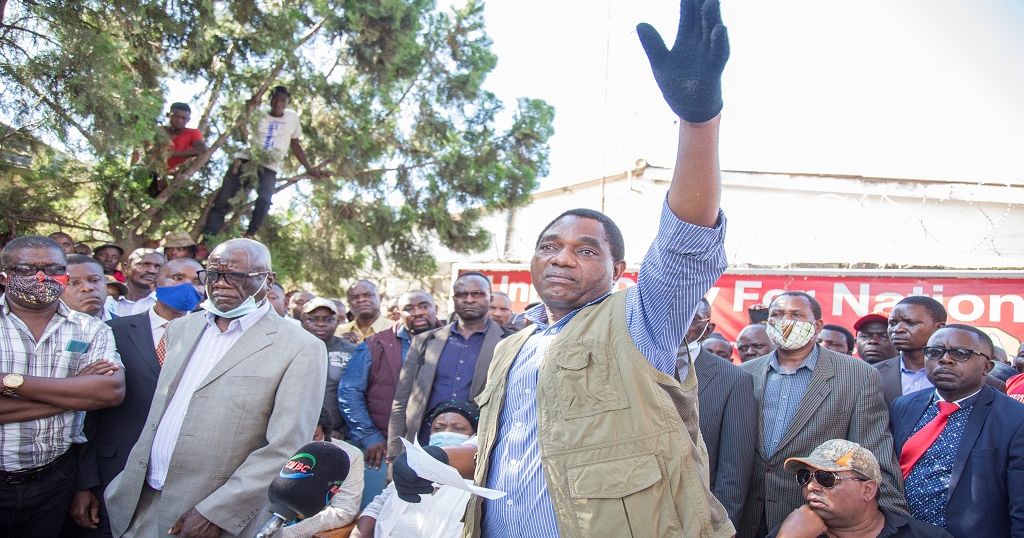 Two demonstrators were killed Wednesday in a protest outside the police headquarters in the Zambian capital Lusaka, where opposition leader Hakainde Hichilema was being questioned, an AFP reporter said.

Riot police arrived to break up a crowd of several hundred demonstrators and shots were heard, leaving the blood-stained bodies of two men on the ground after the protestors fled, he said.

Police issued a statement saying that two people were reportedly killed by gunfire after tear gas was used to disperse an “unruly” crowd.

They said they were investigating the circumstances, which were not immediately clear.

“I say so because of the way the execution was done. It was professionally done,” he said, contending that the two fatalities had been shot in the head.

“Those of us who understand this industry know that that was specialist individuals that were planted in the crowd to kill people. To the family of Kaunda, the family of Nsama: your death will not be in vain. There will be change of government come August 2021 (the crowd cheers).”

“The blood of those killed today is on the hands of (President Edgar) Lungu,” he charged.

Hichilema, 58, is Lungu’s main contender in elections due next August.

Lungu, 63, is struggling with a wave of unpopularity and internal divisions within his party, fuelled by Zambia’s economic problems and anger at perceived corruption.

The country is heavily dependent on copper, demand for which has slumped.

Hichilema, known to his supporters by his initials of HH, told journalists that he was called in to answer questions about a property purchase he made 20 years ago.

A veteran campaigner and self-made entrepreneur, Hichilema bid five times for the presidency between 2006 and 2016.

After narrowly losing in 2016, he spent four months in jail when he contested the outcome.

He has vowed to step down as leader of the United Party for National Development (UPND) if he fails once more.