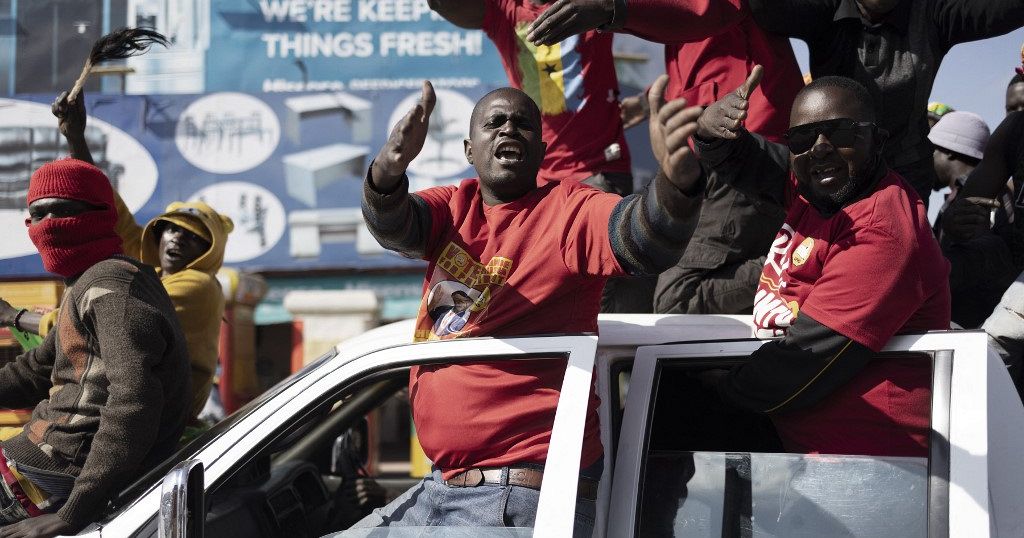 Standing by the coffee machine as he does each morning, a hotel waiter had swapped his usual dark tie for a bright red.

“My vote helped swing it,” he slipped to AFP with a wide smile, eyes twinkling.

Outside Lusaka was electric. UPND supporters that had gathered just after Hichilema’s victory was announced were still parading through the capital, more and more people joining them as the morning went on.

Every other person was wearing red — a beanie, a t-shirt, UPND print wrapped around women’s waists and heads. Jubilant supporters screeched by in minivan taxis and pickup trucks, beeping the wheel and leaning excitedly out of the vehicles. Most shops and street stalls were closed, shutters pulled tightly shut.

On a usually bustling commercial street off Cairo Road, two women were having a quiet celebratory drink in one of several empty mobile credit booths lining the street.

“Of course we are happy but we are a bit afraid, people are misbehaving,” said Katy Mtonga, 25, who had decided not to open her cellphone accessory store across the road.

“I hope Lungu accepts the situation,” she added, as fervent groups of UPND supporters ran past, chanting and waving sticks in the air. Some groups carried coffins drapped in Lungu-printed fabric.

Several police vehicles drove by, sirens blasting, as armed soldiers milled around. Another woman turns up to look for credit with no luck. She has been trying all morning.

“Too many people are running up and down we can’t even work, that’s why all the shops are closed,” Mtonga’s friend Karen Mutandi, 25, explains. “People are scared of coming into town.”

Next door, Martin Muchaili, 43, has still set up his portable passport photo stand.

“I wasn’t surprised, I knew (Hichilema) would win,” said Muchaili, a soft-spoked bearded man in a faded UPND beanie. He explains that “PF cadres” forced vendors to pay for spots in markets or on sidewalks, fuelling resentment. They would also tax minivan drivers for picking up passengers from bus stops.

Many mobile credit booths, market stalls and bus stops had been vandalised overnight.

“That’s the biggest mistake (the PF) made,” he said. “They gave cadres too much power.” “I am confident Lungu will leave,” he added. “Zambians are peaceful, we don’t like fighting.”

Behind Muchaili’s display of passport photos is a stationary shop, one of the only open on the street.

Sarah Mumba, 23, sits behind the counter, eyes slightly puffy from lack of sleep. She had stayed up until the final results were announced and briefly joined street celebrations.

“The last election was not free and fair,” Mumba told AFP. This time “the numbers don’t lie”, she added. “I don’t have any issues with the way (the ECZ) handled the vote.”

A customer, 45-year-old Cornelius Bwalya, walks in to purchase pens and paper for his car repair shop. “We needed change,” he said. Hichilema “made promises”, now we will have to see “whether our issues will be dealt with, the economy and general business”.

Thousands of Hichilema supporters flocked onto the streets of Lusaka, erupting into song and dance, cheering and waving party flags.

The celebrations continued into dawn, as hundreds of people congregated outside Hichilema’s house in a leafy suburb of the capital.

“I am so excited, finally he has done it! Tonight we are celebrating Bally’s victory,” said 21-year-old Rosemary Malunga, referring to Hichilema by his nickname, which is slang for “father”.

Hundreds also took their victory lap to the entrance of the presidential residence, where soldiers and police kept guard.

On Saturday, as ballots were being counted, Lungu claimed the vote was neither free nor fair, but his objections gained little traction.

International election observers have commended the polls’ transparent and peaceful organisation, which saw a turnout of around 70.9 percent — a huge jump from 57.7 posted in the 2016 polls.

But they also criticised restrictions on freedom of assembly and movement during campaigning.

Observers saw the election as a referendum on Lungu’s rule, which saw plummeting living standards and deepening repression in the country of more than 17 million.

Hichilema enjoyed the backing of 10 opposition parties, which threw their weight behind his United Party for National Development (UPND). Legislative and local elections were held alongside the presidential ballot on Thursday.

“Amidst an unprecedented public health challenge, the Zambian people have made Africa proud for conducting a successful election,” Odinga tweeted.

The election, he hoped, strengthens Zambia’s democracy “and reminds fellow Africans elsewhere that nothing is impossible”.

Despite occasional episodes of political violence, Zambia has earned a reputation for stability. Every transition of power has been peaceful since the former British colony adopted its multi-party system in 1990.

“Zambians have lived up to be true democrats. It’s a different African story,” Ringisai Chikohomero, researcher at the Pretoria-based Institute for Security Studies, told AFP.