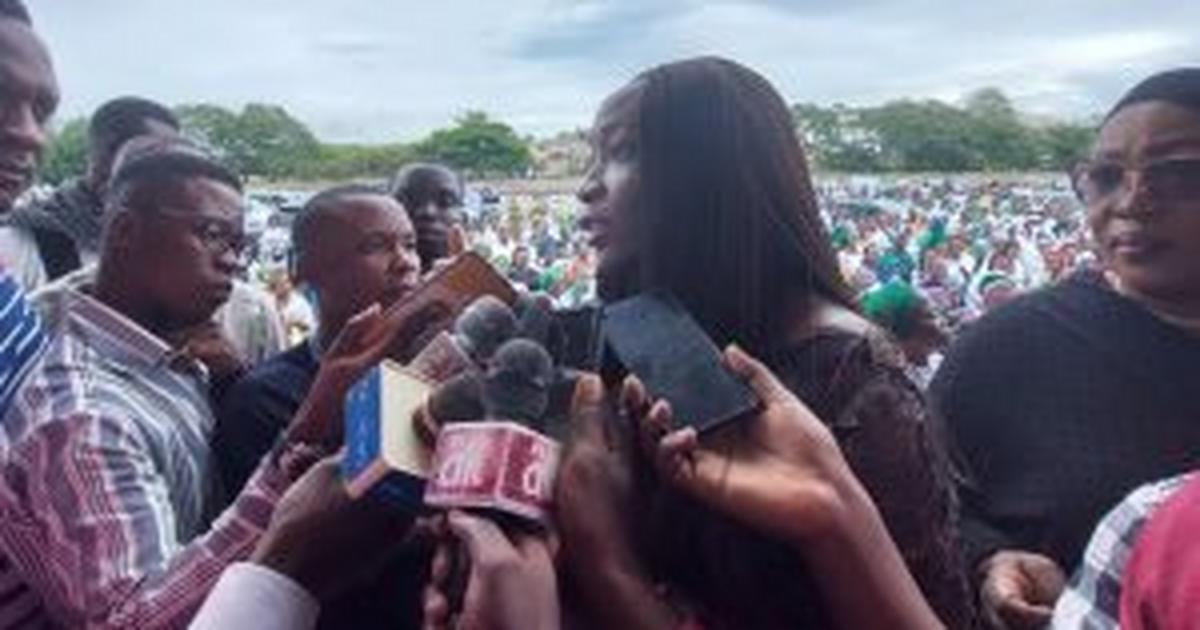 The News Agency of Nigeria (NAN) reports that Hafsat Abiola-Castello is the daughter of Kudirat, wife of Late Chief MKO Abiola, acclaimed winner of the annulled 1993 presidential election.

The women, who defied the heavy rain, took to the streets, and carried various placards with inscriptions such as; “Yahaya Bello, the best man for the job”, “We’re not interested in zoning, this is one Nigeria”, and “Yahaya Bello, hero of women inclusion,” among others.

Abiola-Castello said Nigerian women had decided, to once again, take their destinies into their hands by supporting the Kogi governor, the only governor that had given them a voice, and showed that women could turn stone into bread.

According to her, if such man is given a chance, he will do the same for Nigeria.

“Seeing this huge honest crowd, I am confident that Yahaya Bello’s good deeds, belief in women, and giant strides in a women-filled government, have earned him the trust of Nigerian women.

“And I assure you, he will never forsake you. He has demonstrated this loudly in Kogi,” she noted.

Also, Mrs Nike Aroloye, leader of the South-West Market Movement for Yahaya Bello, said the women of Nigeria were already looking beyond the political party primaries.

Aroloye, also the Deputy National President, Market Women Association of Nigeria, said: “We already see the ticket with Yahaya Bello. Once he gets it, we are marching straight to Aso Rock. All my market women are ready to support him.

“We will go everywhere for this cause. He has said we are important. We will give him the reward,” she said.

Similarly, Nollywood Actress, Rose Odika, who led other South-West female stars to the rally, said: “I have said it before, and I will repeat it here, Yahaya Bello is the one we will support.

“From all he has done for women and for his state in general, he is the one to beat. We will only support those who support us.

“It has never happened before in the history of Nigeria for a leading presidential candidate to appoint a woman as the director-general of his campaign organisation,” she said.

Odika also said anyone who had the interest of Nigeria at heart would not be drumming the beats of zoning, but pray to God to give the country the best leader at this crucial point in history.

NAN reports that the women who participated cut across different key sectors and professions such as banking, media, nollywood, medical practice, frontline entrepreneurs, market leaders, engineers and religious groups among others.