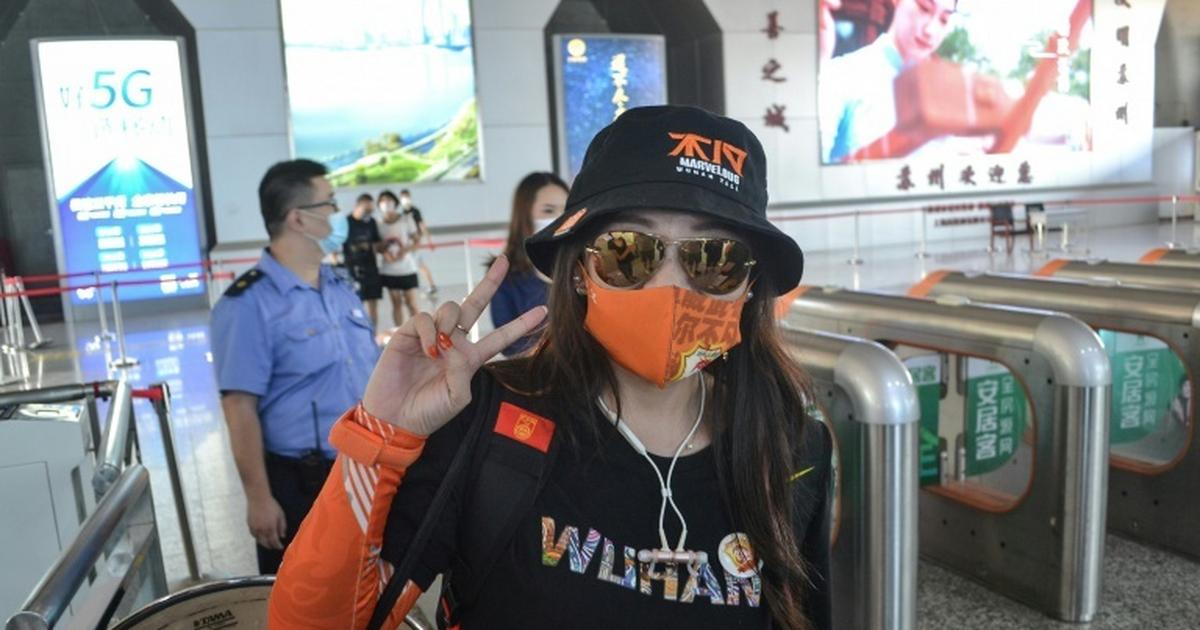 For some, like Gao Yajun, it is the first time they have left the central Chinese city of Wuhan since the coronavirus emerged there late last year.

The 42-year-old is a Wuhan Zall fanatic who has her nails painted in the club’s orange colours, an orange streak in her hair and a face mask with the team’s fiery emblem.

“I don’t think I can fall asleep tonight, we couldn’t even get to sleep last night because we were so excited,” Gao said on the eve of the Chinese Super League (CSL) clash against title contenders Beijing Guoan in Suzhou, near Shanghai.

“I saw that everyone else was awake too, chatting in the (online) group, and they all said they couldn’t sleep.

Gao, a drummer for the Wuhan fans, was among an advance party of about 50 chanting diehards who arrived in Suzhou by high-speed train on Saturday with flags and banners, including one that read: “Defend Wuhan.”

“We have hearts of absolute sincerity and stay united through the wind and waves,” they sang in unison after boarding a coach to their hotel.

Along with Dalian, Suzhou is hosting games this season in the CSL, which has been reformatted and kicked off five months late because of the virus.

The CSL has been slowly opening up to a very limited number of spectators in recent weeks, having started the season behind closed doors in July.

It is more evidence of China’s recovery from the coronavirus — the number of new infections has plummeted since the country shut down in February.

However, the return of Wuhan Zall fans — nine months after they last saw their team in the flesh in the CSL — is especially significant.

In late January, Wuhan and its 11 million people was the first city in the world to go on a coronavirus lockdown. It dragged on for 76 days and was especially harsh.

“The entire city pressed the pause button,” said Gao, describing how the streets were left deserted.

“But now after the restart (of life) and our return to the stadium, we can show the spirit of the Wuhan people and our fans to other fans across the country, and even to the whole world.”

About 300 Zall supporters are expected to make the 750-kilometre (450 miles) trip eastwards to Suzhou for the Beijing game. The club is giving away tickets for free.

Among them was 74-year-old Shi Anshi, a Wuhan native who has supported the team since it was founded in 2009.

It is also his first time out of the city since coronavirus.

“From last year until now, I have been frustrated and yearn for football,” said Shi, sporting an orange jersey with the signatures of players scribbled on it.

“I don’t care about the result against Beijing, I only want to feel the team’s fighting spirit.”

Zall’s coach Jose Gonzalez, whose side was stranded in Spain during pre-season because of the virus, told a pre-match press conference that having the fans back was “special”.

“I am very grateful to them and they can bring a lot of help to the team,” said the Spaniard, who has overseen five victories in eight games this campaign.

Zall will leapfrog Beijing into second place in the Suzhou group of eight teams with victory.

Shi, who has had “several” coronavirus tests, and the others are aware that a stigma surrounds their city.

He has a message: “Wuhan is definitely safe now, I hope you all come to Wuhan for sightseeing.

“And if you are a football fan, come and cheer for the team with us.”