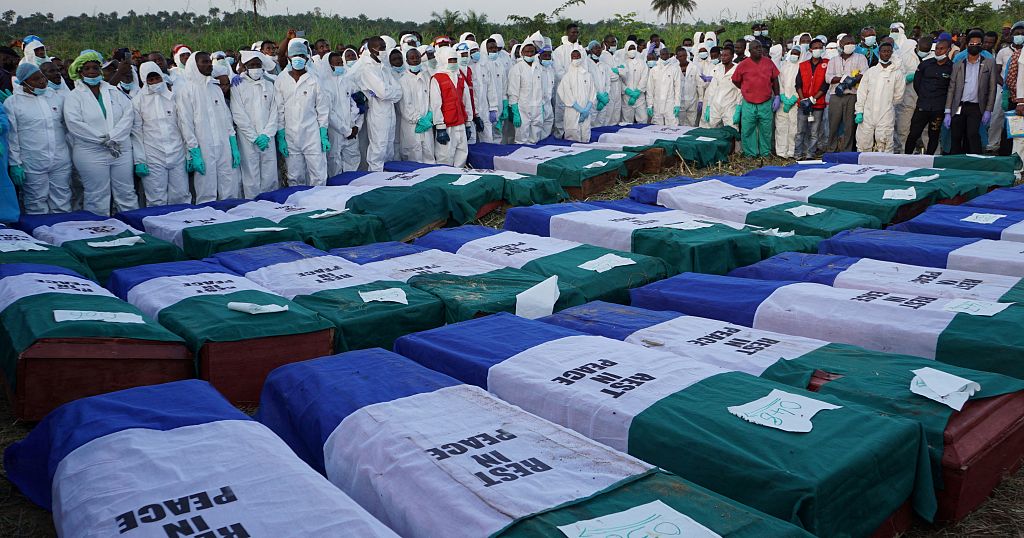 The bodies of dozens of more than 100 victims killed during an explosion in Sierra Leone last week were buried in a mass ceremony on Monday in Waterloo.

The coffins were transported in military trucks from the morgue in the capital Freetown to the cemetery in Waterloo, a neighboring city.

The trucks passed by the site of the explosion, where people stood in in the street to pay their last respects to the victims.

At the cemetery, relatives and workers – dressed in protective clothes to bury the bodies – followed the trucks while crying and covered their faces.

Dozens of coffins were lined up covered with the Sierrra Leone’s flag reading “Rest in Peace”, during the ceremony attended by Sierra Leone President Julius Maadia Bio, and other officials.

“We will investigate what happened,” Bio said in a short speech during the burial and called on authorities and society to work together “to see what we can do in order to stop these disasters from happening to us”.

The explosion took place late on Friday when a tanker collided with another truck as it was pulling into a gas station near a busy intersection in Wellington, just east of the capital, according to the National Disaster Management Agency.

In this deeply impoverished country, crowds still rushed in to scoop up fuel, witnesses said. It was not immediately known what caused the leaking fuel to ignite but a massive explosion soon followed.