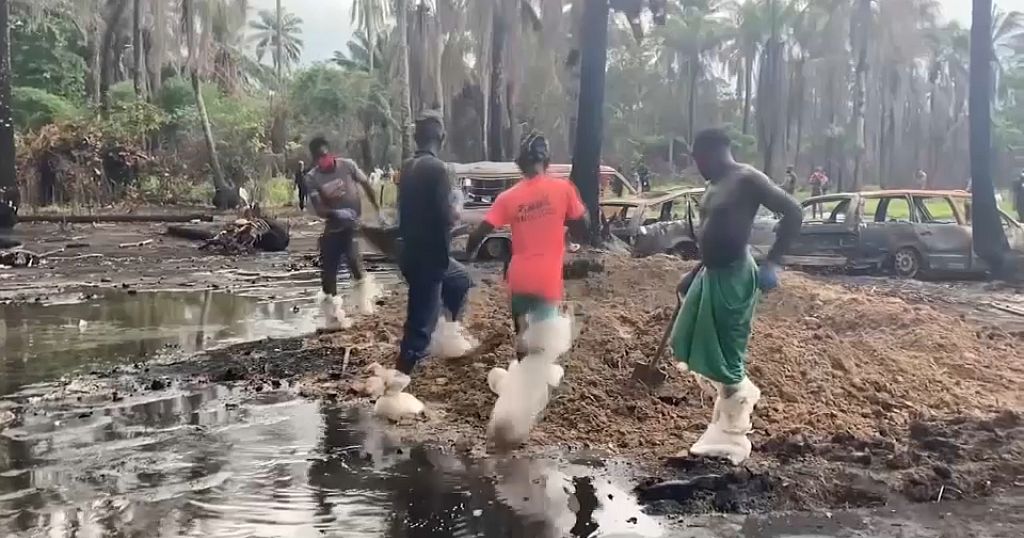 The remains of Nigeria’s oil-refinery victims were interred on Tuesday. If the majority of the charred bodies had been carried away and laid to rest by families early on, just about 50 were buried in mass graves.

The explosion that occurred on Friday between the southern oil states of Rivers and Imo, killed over a hundred people in Africa’s largest crude oil producer.

“The locals have been able to identify one or two persons and have taken them but the casualty figure as of last visit on Sunday still remains a hundred and ten.”

The workers and traders who died worked in an illegal refinery. Such facilities are operated in many parts of southern Nigeria which grapples with insecurity and a high rate of poverty. A situation that could explain why some resort to working in such dire environment according to Bright Onyenwoke, a youth leader.

“Means of survival here are hard so maybe as a result of finding things difficult that made them join this business. There’s no how that you can provide job for people and they will prefer joining this kind of business knowing the risk is high. I am not actually saying that what they are doing was right, but what I mean from my own understanding, is part of a result of frustration…”

The socio-economic context is not the only factor according to the chairman of the local government. Officials, such as Marcellinius Amadioha, accused security agents of “sabotage” in the incident, saying they work with the operators of illegal refineries: “Blaming the security agents does not mean they are the people that orchestrated it, but why we blame them is that they were so loose that these illegal bunkers could come here [..], Chairman of Ohaji-Egbema Local Government said. That’s why we blame them. Not because they are the people that were doing it but the security agents should be able to stall anything that is illegal and don’t allow them to happen.”

Nigerian President Muhammadu Buhari has ordered the nation’s security forces “to intensify the clampdown” on similar facilities to prevent a repeat of Friday’s tragedy.