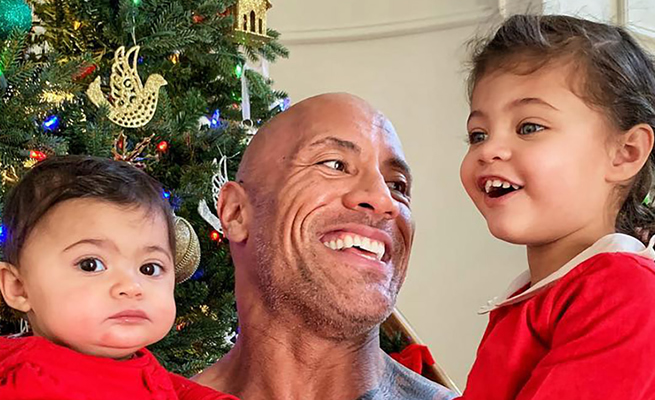 Dwayne Johnson and his family have tested positive for the novel coronavirus (COVID-19), the star revealed on Instagram Wednesday.

The actor, 48, shared that he and his wife, Lauren Hashian, and their daughters Jasmine, 4, and Tiana, 2, all have been sick with the virus, with the actor and his wife being particularly unwell. They are, thankfully, now feeling better, he told fans.

“I wanted to give you guys a little helpful update on things that have been going on on my end for the past two-and-a-half to three weeks now. So the update is this: my wife Lauren as well as my two baby girls and myself, we have all tested positive for COVID-19,” Johnson began his video message, shared on Instagram.

“I could tell you that this has been one of the most challenging and difficult things we have ever had to endure as a family, and for me, too, personally as well,” the Jumanji star continued. “And I’ve gone through some doozies in the past.”

“Testing positive for COVID-19 is much different than overcoming nasty injuries, or being evicted, or even being broke, which I have been more than a few times,” Johnson said, adding that the reason contracting the virus is so different “is because my No.1 priority is to always protect my family. And protect my children, my loved ones.”

Johnson said that he and his family contracted the contagious respiratory virus from family friends, who he said are “devastated” that they unwittingly spread the virus.

“I wish it was only me who tested positive, but it wasn’t, it was my entire family, so this one was a real kick in the gut. But I am happy to tell you guys that we as a family are good. We’re on the other end of it, we’re on the other side. We’re no longer contagious, and we are — thank God — we are healthy.”

Johnson said that while his daughters “bounced back” from the virus pretty quickly, he and Lauren “had a rough go at it.”

“We are counting our blessings right now because we’re well aware that it isn’t always the case that you get on the other end of COVID-19 stronger and healthier. I have had some of my best friends have lost their parents, their loved ones, to this virus that is so incredibly relentless and unforgiving, and it is insidious,” he said.

“So for our babies, Jazzy and Tia, they had a little sore throat the first couple of days, but other than that, they bounced back and, and it’s been life as normal, happy babies running around and playing.”

The Ballers star urged his fans to exercise extreme caution when interacting with others to prevent the spread of COVID-19.

“If you guys are having family and friends over to your house, you know them, you trust them. They can be quarantining just like you guys. You still never know. You never know,” he said, suggesting to have visitors “tested the day before.”

“Don’t let your guard down, boosts your immunity with antioxidants, vitamins, things of that nature,” he added.

“The other thing is wear your mask, we have been in quarantine for months, we wear our masks every day,” Johnson said. “This baffles me that some people out there, including some politicians, will take this idea of wearing mask and make it a political agenda of a political agenda, politicizing. It has nothing to do in politics.”

“Wear your mask. It is a fact, and it is the right thing to do. And it’s the responsible thing to do,” he continued, adding that people like his mother with pre-existing conditions are protected by the face coverings.

The Rock also pointed out that many people are refusing to wear masks citing lung issues but his mom, Ata Johnson, wears a mask without issue despite having a severely diminished lung capacity after surviving stage III lung cancer.

“She has COPD too as well, that never goes away, but she wears a mask every day because it’s the best thing for her health and her safety,” the star added.

“Use me as your example,” Johnson concluded his lengthy video. “Remember these takeaways that I shared with you and stay healthy, my friends, and I’ll see you down the road.”

Johnson and Hashian celebrated their one-year wedding anniversary in August. The pair first met in 2006, and began dating in 2007. Johnson is also father to 19-year-old daughter Simone from a previous marriage.