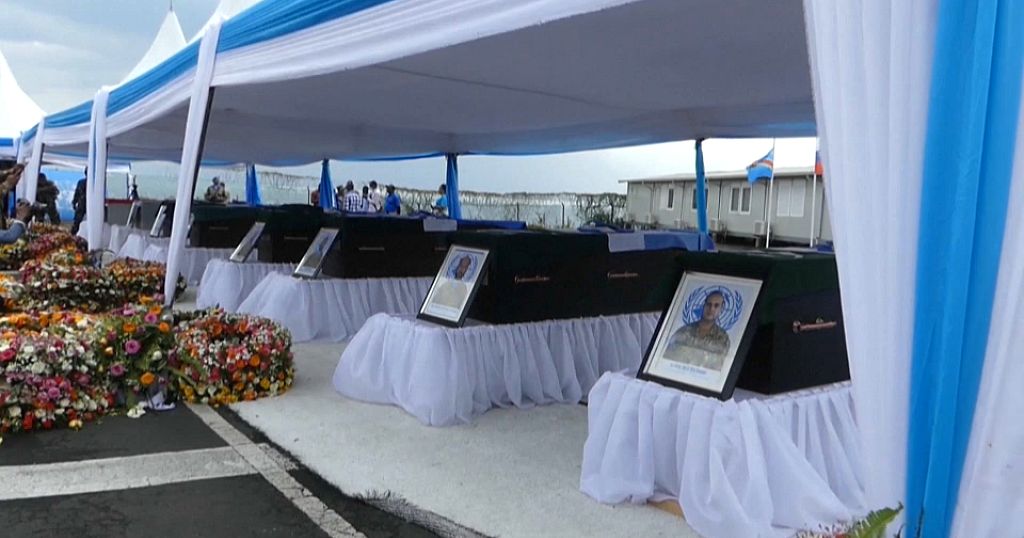 The Congolese authorities and the United Nations Mission in Congo paid tribute to the eight peacekeepers killed in a helicopter crash in the Democratic Republic of Congo earlier this week. The crash killed six Pakistanis, a Russian and a Serb. The helicopter was on a mission carried out in the North Kivu province, in the east of the country, an area where clashes have taken place in recent days between rebels of the M23 movement and the congolese security forces.

The UN has launched an investigation into the incident as both sides blame eachother.

“As we remember our peacekeepers, we cannot ignore the many soldiers and civilians, including women and children, who have fallen under fire which continue, sadly, to resound in eastern Congo“, declared at the ceremony taking place in Goma, Bintou Keita, Representative of the UN Secretary General in the DRC.

“Th__e determination and will of the Armed Forces of the Democratic Republic of the Congo and MONUSCO troops in the face of the various losses of human life will be the motivation for the next missions.”, said Gilbert Kabanda, the Congolese minister of Defence.

On Friday, the Rebel group declared a unilateral ceasefire, claiming they were ready to talk with Kinshasa and wished for a “peaceful settlement” of the conflict.“We remain faithful to our political line, which is to reach a peaceful settlement of the crisis with the government. The Congolese revolutionary army reserves the right to retaliate vigorously in the event of a new war initiative by the national army or its auxiliaries.“, announced Willie Ngoma, M23 spokesperson.

The group was defeated by the national army in 2013 But took up arms again last November asking for the demobilisation and integration of its combatants, as promised they say, by the governement.

The congolese authorities haven’t yet reacted to the peace settlement suggestion.