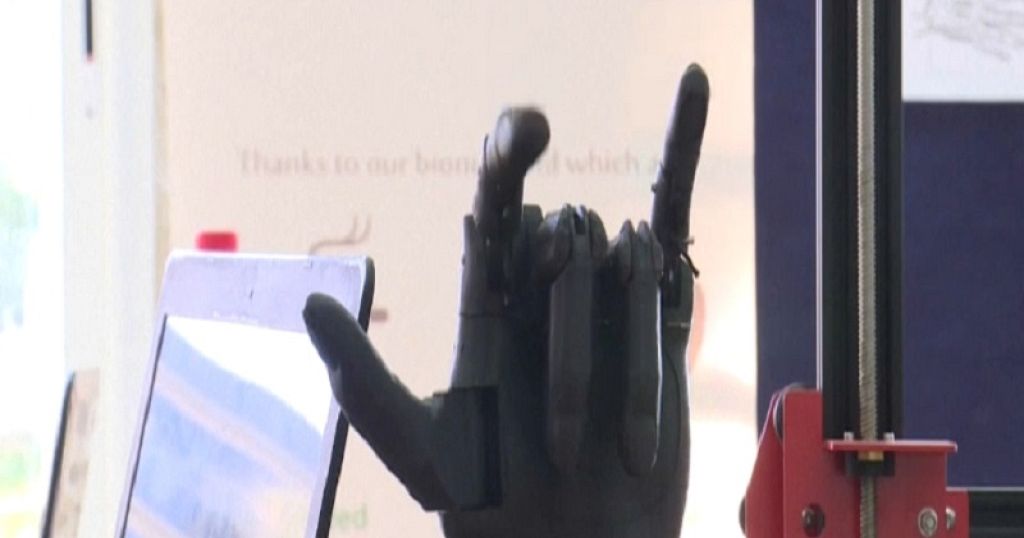 Mohamed Dhaouafi, is founder and CEO of Cure Bionics — a Tunisian startup launched in 2017 which is developing a 3D-printed solar-powered and affordable bionic hand to help amputees and other people with physical disabilities across Africa.

The customisable bionic hand is made of Lego block-like parts that can be replaced if damaged or to match a child’s physical growth. Unlike traditional devices which otherwise require an expensive series of resized models as children grow up.

Dhaouafi highlights what makes the device unique, “Compared to what exists on the market, the prostheses we are developing are much smarter because we are trying to integrate “machine learning” into our algorithm to facilitate the recognition of the user’s muscle signals. It is also lighter because it is customisable 3D printing.”

The 28-year-old designed his first prototype as an engineering student and started his high-tech company while still living at his parents’ house – and not without difficulty.

As when Dhaouafi launched his start-up in 2017 from his parents’ home, at a time when many of his classmates chose to move abroad seeking higher salaries and international experience, he chose to persevere to realise his passion on Tunisian soil.

“It was like positive revenge,” he told AFP. “I wanted to prove I could do it. I also want to leave a legacy, to change people’s lives.”

Dhaouafi eventually managed to pool money raised through sponsored competitions and seed investment from a US company and was able to recruit four young engineers.

He reflects on the hurdles he has since overcome, “There are plenty of challenges, administrative challenges. There are legal challenges like the certifications that we need in our profession. There is the question of access to financing, especially in the medical sector and hardware. There is also the aspect of the import of the components and online payment. There is no way to pay online. It is these kinds of problems that we find every day in our adventure. “I decided to stay in Tunisia and develop so Bionics become a leader because it is a personal challenge. It’s more than a personal (challenge) because there are thousands of people around the world who need what we develop here.”

A Handful of Home-Grown Success

His efforts are bearing fruit as Cure Bionics hopes to market its first bionic hands within a few months, first in Tunisia and then elsewhere in Africa.

The device works with sensors attached to the arm that detect muscle movement and an artificial intelligence-assisted software that interprets them to transmit instructions to the digits.

The hand itself has a wrist that can turn sideways, a mechanical thumb and fingers that bend at the joints in response to the electronic impulses.