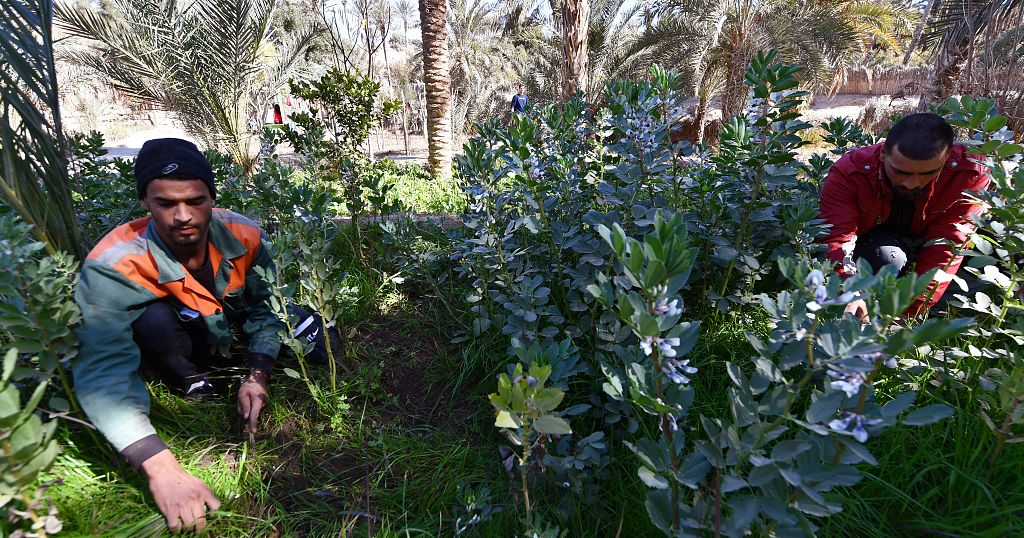 A remote oasis in Tunisia’s desert was exhausted by decades of wasteful water use for agriculture — but now pioneers around an eco-lodge are reviving the spot with innovative projects.

They hope their back-to-basics approach can keep alive the ancient Saharan caravan stop and its traditions as a sustainable alternative to the region’s high-irrigation date plantations.

“Among the palm trees, everything can grow,” said Mohamed Bougaa, 63, a farmer in the remote Nefta oasis, a seven-hour drive from the coastal capital Tunis.

“There’s everything you need here: vegetables, fruit. We can plant peppers, tomatoes, carrots — everything grows when there’s sun and water.”

The problem has been that the Nefta spring — which once delivered some 700 litres (185 gallons) of water per second — has been exhausted to irrigate the region’s famous dates, called “deglet nour”.

“The Nefta springs dried up 20 years ago,” said Bougaa.

As underground water sources have failed and summer temperatures peaked at a scorching 55 degrees Celsius (131 degrees Fahrenheit) last August, the season’s crop has been disappointing.

Patrick Ali El Ouarghi, who runs an eco-tourism lodge in the oasis, said date palm plantations, at the right scale, can be run sustainably.

He called them an ideal demonstration of permaculture, a system for producing food organically by mimicking natural ecosystems.

The French-Tunisian set up his Dar Hi lodge 11 years ago — including the so-called “Palm Lab” where engineers, architects and artists discuss how to conserve the oasis.

The ecology project aims “to make investors and farmers want to reinvest in the oasis, because it’s decaying a bit”, he said.

A key theme is tackling the severe water shortages by experimenting with technology such as drip irrigation.

The current system of flooding orchards with water, pumped from 100 metres (300 feet) below ground, is wasteful, he said.

Not far from Dar Hi, others are trying different ways of creating value in the oasis.

American Kevin Klay, 35, a former resident of Sousse in northern Tunisia, says he fell in love with dates during a visit to the south.

“We realised that many dates, up to 20 to 30 percent, were thrown out and not used because of a small visual blemish,” he said.

So he bought a few kilos (pounds), removed their seeds, dried them and then put them through a coffee grinder.

The result, he said, was a sweetener “with a fifth of the calories of white sugar” that is full of fibre and contains “more potassium than bananas”.

Armed with this knowledge, Klay in 2018 launched “Dateible”, selling his “date sugar” produced from the organic-certified desert fruits for export.

He now employs nine people, seven of them women.

“We’ve seen huge demand, particularly in the US where our main market is,” he said.

The firm is exporting dates in bulk and also starting to sell on online retail site Amazon.

Several firms are producing other date derivatives such as a coffee substitute made of date pips and a form of molasses for use in pastries.

Back at the lodge, the restaurant is reviving traditional desert cuisine.

“It’s very simple and dates from the arrival of nomads,” when Nefta, today regarded as a spiritual home of Sufism, was a key stop on Saharan desert routes, El Ouarghi said.

They brought “unknown flavours and spices that have remained here as a tradition”, he said.

“It’s not the same as buying them at the market: cleaning the leaves, the smell, the flavour, you have to know exactly how to do it,” the 40-year-old said.

She cooks a menu of dishes she learned from her mother and from French celebrity chef Frederick Grasser Herme, the recipes collated in a recently published book on oasis cuisine.

Some recipes are also adapted to use Moringa, an Indian tree famed for its nutritional and medicinal qualities and its ability to thrive in arid conditions.

The tree species may be new to the oasis, but residents are hoping that a mix of old and new can keep both their community and their ecosystem in good health.