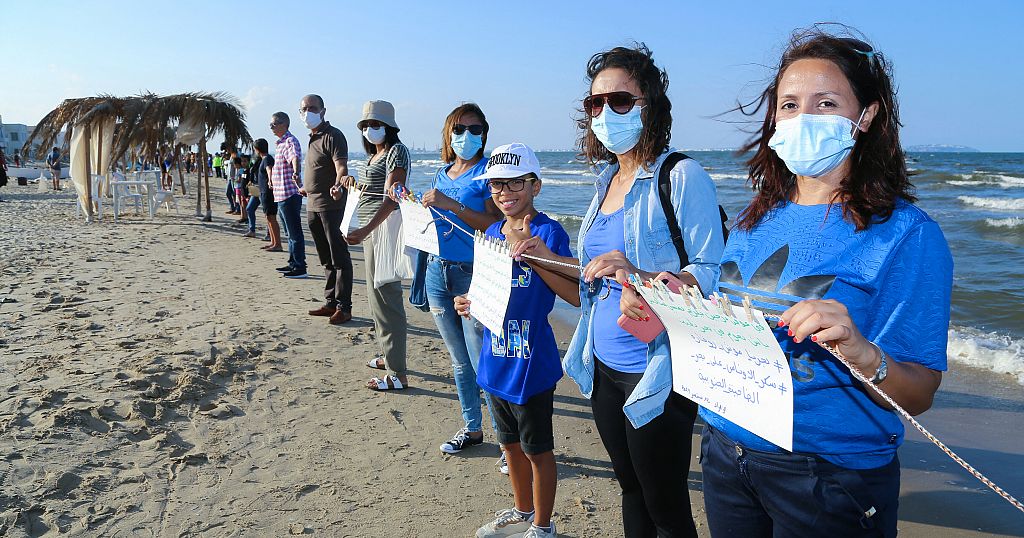 Tahar Jaouebi looks out from a beach south of Tunis remembering the 1990s when the water was still clean enough to bathe in.

“Now I can’t swim anymore, and neither can my son,” he says.

Jaouebi, 47, is one of the hundreds of protesters who formed a human chain over the weekend to highlight the pollution plaguing the coast south of the Tunisian capital.

Maryam Chergui, a 37-year-old resident of the neighborhood of Ezzahra, bemoans the state of the water nearby.

“It’s very dirty,” she says. “There are dead shells and dead fish. We’re not taking care of our environmental wealth.”

Organizers say some 3,500 people joined the protest along the beaches between Rades and Borj Cedria, a 13-kilometer (eight-mile) stretch of sheltered coastline home to around 300,000 people.

Campaign group Action Citoyenne has been battling for two years against the pumping of sewage — sometimes untreated — into the sea.

It organized Sunday’s protest to “condemn the deteriorating state of our sea, which is polluted with bacteria and has become a danger to health,” said the group’s president Doniazed Tounsi.

Ines Labiadh of the FTDES rights group said it was the “longest human chain in the history of Tunisia”, where a 2011 revolution overthrew dictator Zine El Abidine Ben Ali and sparked uprisings across the Arab world.

The FTDES distributed placards recalling Article 45 of the country’s post-revolution constitution, guaranteeing “the right to a healthy and balanced environment”.

Hammam Lif, nestled further around the bay between Tunis and the Cape Bon peninsula, was once frequented by the Beys, Ottoman governors of Tunisia who built magnificent palaces nearby.

More recently, in the 1990s, “poor and middle-class Tunisians came to these beaches to swim, as they’re easily reachable by train,” said Labiadh.

But today, dark, foul-smelling wastewater from the southern suburbs flows via a wadi into the sea, which activists say is full of harmful microorganisms including streptococcus and faecal coliforms.

“According to international standards, there shouldn’t be more than 500 bacteria per 100ml,” says Tounsi. “Here, there are 1,800. It’s an ecological catastrophe.”

Labiadh blames a surge of new housing units not connected to the national sewerage network, faults with the network itself and pollution from leather and tomato processing factories near the Rades port.

Ben Ali’s regime oversaw a large push for industrialisation, particularly in the coastal regions of Tunisia.

But the 2011 revolt set off a decade of political turmoil, with environmental safeguards going by the wayside.

The pollution along the coast south of Tunis has continued despite promises from officials during 2018 local elections.

Badredine Zbidi, the deputy head of Ezzahra municipality, says the crisis has economic consequences for the region.

“People don’t even eat the fish,” he said.

“The sea is a gift from God, but we are victims.”