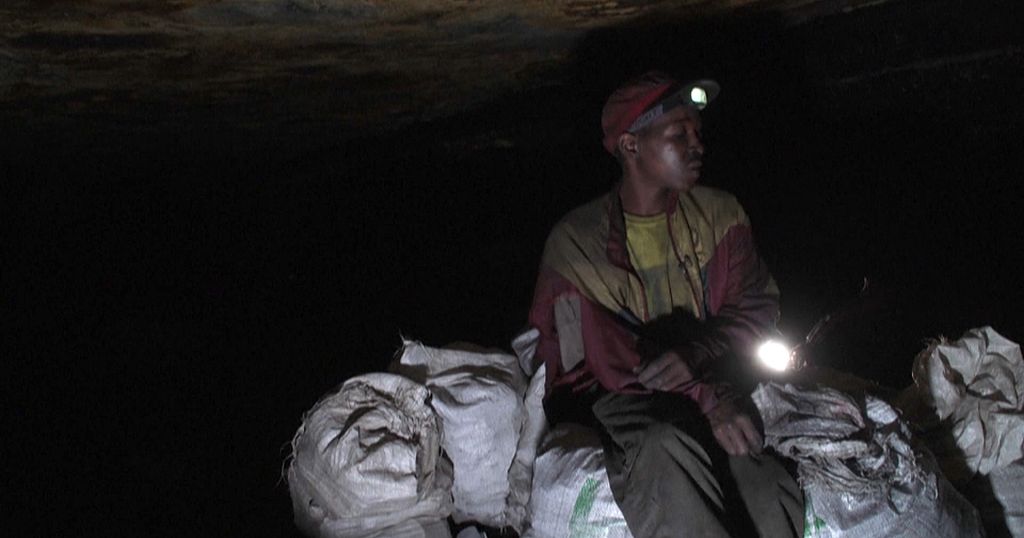 At dusk, a pick-up truck leaves filled with coal. In front of the abandoned mine, two hours from Johannesburg, Bonginkosi Mhlanga throws his pickaxe over his shoulder. As an illegal miner, he will stay at the bottom until dawn.

There are tens of thousands of “zama zamas” in South Africa, where the unemployment rate is over 30%. Those who “try and try again”, in Zulu, share the remains of old wells that have been abandoned because they are no longer profitable, often at the same time as the local workforce, creating pockets of poverty.

Bonginkosi descends the 82 steps that lead dozens of meters underground. They quickly become wet and slippery. The air is getting tighter.

The corridor of the mine is 1.60 m high. With their backs bent, a bag of coal on their backs, the ‘zama zamas’ pass in the deep darkness climbing. They then bring to the surface the fruit of their work of one or several days.

The further you go, the lower the ceiling seems. The labyrinth extends over hundreds of kilometers.

In the light of a headlamp, Bonginkosi hits hard. He makes black splinters fly and piles them up with his bare hands in old flour bags. Raw coal that he will sell at a derisory price, 500 rands a ton (less than 30 euros).

“This is my spot,” he shows AFP, pointing to a two-meter-wide vein. Underground too, there are rules: “I clean my spot, I take care of it and nobody touches it”.

Every year in this country, which derives 8% of its wealth from mineral extraction, illegal miners die in collapses or explosions at abandoned sites. According to the National Association of Independent Miners (NAAM), South Africa has 6,000 abandoned mines.

“When you go down, you never know if you’ll come back up,” sighs Bonginkosi, 31. He’s had bad experiences, but he’s not chatty on the subject. “If it happens, you leave everything and run.

The mining groups “come, mine and leave, leaving behind the local workers, who have sometimes contracted diseases,” sums up Zethu Hlatshwayo, spokesperson for NAAM.

The water and air are polluted. Asthma is a common disease in the region, according to NAAM and the Kuthala group, an environmental protection organization present in this corner of the Mpumalanga province (north). But it is difficult to obtain precise data from health authorities.

Coal is slowly poisoning these “black faces” but it is their only income. So the illegal miners of Ermelo, a mining town that has been deprived since the closure of several sites, hope one day to obtain permits.

Three years ago, 800 “zama zamas” from the diamond mines of Kimberley (center) were regularized, as the authorities tried to curb illegal exploitation.

In Mpumalanga, coal is abundant at shallow depths. The fertile plateau covered by lakes and swamps is also home to twelve power stations, the heart of South Africa’s coal industry. And the place in the world where the air is the most polluted, according to Greenpeace.

In the late afternoon, in the vast townships around Ermelo, the intense smell of combustion gives one a headache. Thick gray smoke escapes from the roofs of the tin houses: everything here is coal-fired, the heating, the cooking.

“This is all we have,” says Buhle Nkosi, seven months pregnant, in the township of Wesselton. In her cramped space, a coal stove is the only source of energy. No electricity, no running water. No toilets either.

South Africa gets 80% of its electricity from coal and exports to China and Europe. The country is also the 12th largest emitter of greenhouse gases. Clean energy, solar or wind power, accounts for less than 2%.

According to the South African NGO groundWork, aging, poorly maintained coal-fired power plants are responsible for 2,239 deaths per year from heart disease, respiratory infections and cancer.

The government wants to reduce this production to 59% by 2030. But “these things take time and we are hungry today,” says Zethu Hlatshwayo.

“Pollution doesn’t hurt us as much as hunger. Sorry for the next generation, but we are suffering today,” says Eddie Malaga, an illegal miner we met at dawn. Like many, he pulls on a joint before going to the bottom of the mine.

It has been daylight for a while when Bonginkosi Mhlanga pulls up his last few bags of coal with incredible effort. In twelve hours of work, he does not reach one ton. He is paid 250 rands, or 15 euros.