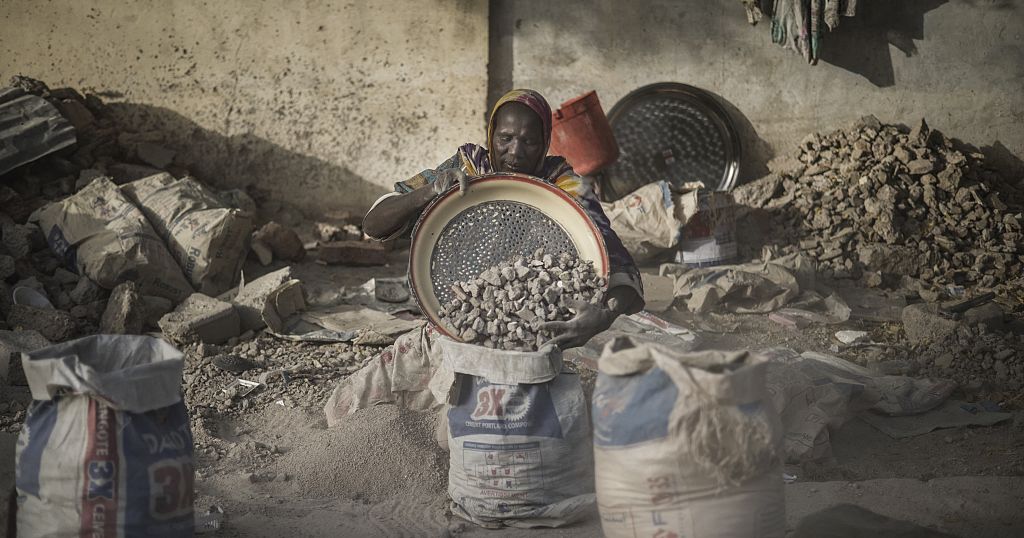 In one hand Idjele grips a heavy hammer, in the other a block of concrete that she smashes into pieces with heavy blows that narrowly miss her fingers, her gaze towards the horizon.

She has been crushing gravel for so long that the gestures of the job have become second nature. In the heart of N’Djamena, dozens of women spend up to 12 hours a day bent over this work, pulverising concrete, cement or brick chunks while children hover around them in the dust and heat of 45 degrees Celsius.

The women work on piles of debris along roads and in vacant lots at the foot of the modern buildings that make up the Chadian capital’s business district.

The United Nations ranks Chad as the third least-developed country in the world and these women are at the heart of a side industry re-using building materials.

Men buy blocks from demolition sites and sell them to the gravel crushers, who break them down and re-sell them to those who cannot afford concrete. Mixed with mud or a little plaster, the gravel will serve as building material for new homes.

‘All I could find’

Idjele is only 38 but like the women around her she bears the marks of gruelling work, her face smudged with dust that reddens her eyes, her lips cracked and swollen and fingers raw from constant contact with grit as she sifts sand for even the smallest stone.

Her 80-year-old aunt did the same work until she went blind. Now she sits behind Idjele, a mother of six who was widowed three years ago, keeping her niece company and serving her tea.

“I’ve been doing this since my husband died,” Idjele says between hammer strikes, adding that her eldest children work with her.

“My husband was a soldier and after his death I wasn’t able to receive his pension. I had nothing left so this is all I could find to feed my kids,” she says.

Nearby, a tiny boy naked from the waist down clambers over a pile of dusty blocks. Mamadou Youssouf, 42, arrives pushing a makeshift wheelbarrow heavy with 100 kilogrammes of stone he bought for 1,000 CFA francs (S$2.40) and will sell to the stone-crusher women for twice the price. Idjele fills bags with stones she sells for 500-600 CFA francs each to men who come to load their pickup trucks. In one day she may take home 500 to 600 CFA francs (S$1.20-1.40) .

Children squeal with delight as Youssouf dumps his load of stone near their mothers sending up a cloud of dust. Their hair has a rusty colour, which could come from the powder of broken bricks or be a symptom of malnutrition. One out of five children born in Chad dies before the age of five and 40 per cent suffer from delayed growth according to the World Bank, which estimates that 42 per cent of the population live below the poverty line.

A quick internet search reveals the dangers of inhaling cement dust, including irritation of the eyes and sinuses, lung problems and even cancer. In Europe workers on construction sites are required to wear FFP2 masks and gloves – but these women barely cover their noses with their shawls.

Habiba has been doing this for eight years. “I used to be a cleaning woman but as I got older I couldn’t work as well and my bosses yelled at me, insulted me, fired me,” she says, her eyes red. “I could no longer feed my seven children.

She isn’t sure how old she is – “between 50 and 60” she guesses. “Now I work 12 hours a day but at least no one gets angry with me and I can feed my kids and send them to public school,” she says before adding with a wide smile, “I am free.”

Haoua Mahamat says a sense of freedom unites all the women here, transcending differences of tribe, ethnicity or religion that are often the root of conflict in this vast country.

They are also united in death, admits the 30-year-old who has been crushing stone for 10 years, explaining that nearly all her colleagues have suffered the loss of a spouse and the income he used to provide. And while they have no boss to harass them, the women are also without any offers of help. “Free?” scoffs Therese Mekombe, president of the Chadian Women in Law Association, who says neither the state nor the UN or any other charity has showed the gravel crushers any concern.

“They may have a mother’s pride in being able to feed their children – but at what cost?”