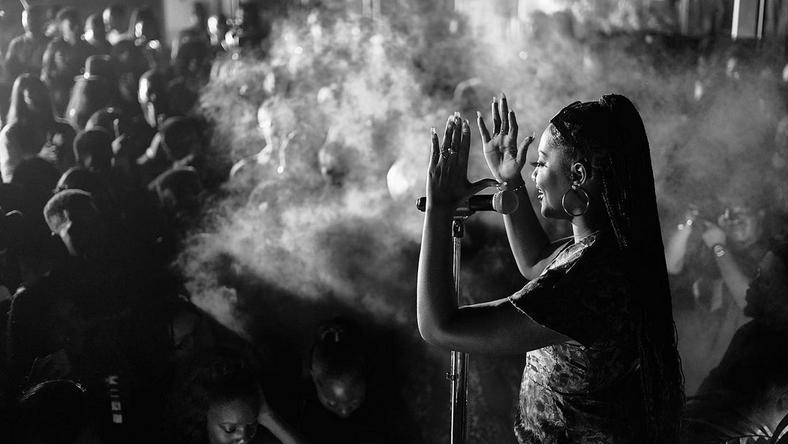 Until a few months before her EP dropped, Tems didn’t know that story. But when she finally knew, it felt like a part of her formative story and she thought to share with her audience on her debut EP. Her music has always been a part of who she is, the stories she tells are some of her real-life experiences.

“My songs are like entries in my diary,” she says. It then makes sense that huge parts of her life and formation like that voice note from her mom would make an EP filled with other real-life experiences.

For someone who didn’t really realize that she could really sing till she was 17, one would understand why her mom’s story hit her. Before she was 17 and she realized a need to take music seriously, she was in love with music. She could play the piano and the guitar. She also wrote a lot of songs.

“It was like going to the swimming pool to swim, not just to become an olympic swimmer but just because you like to swim,” she says. “I learned to play the piano because I wanted to learn it. It wasn’t because of anybody else.”

She didn’t take the music seriously until she released ‘Mr. Rebel.’ Interestingly, the song was just one of those songs she had written and put on her laptop. When she released it, she just wanted to test the market and the song caught fire. Before then, she was a complete novice as regards the music industry.

“I recorded the song for the sole purpose of releasing it and it taught me the steps and processes to releasing music,” she says. “Before then, I didn’t know anybody. I didn’t even know there was necessarily an industry… After it dropped, I just felt like this was the beginning.”

Looking back, she just wanted to share her music with people – she didn’t think she was going to have one million streams off only Apple Music from one song within a few months.

Just after ‘Mr. Rebel,’ Tems released ‘Looku Looku’ which is quite simply a supreme bit of musicality. But interestingly, the song didn’t have a video but her next single, ‘Try Me’ did. ‘Try Me’ took Tems from underground circles into niche and then into the earliest parts of her sub-mainstream journey.

“Like ‘Mr. Rebel,’ I just wanted to release music with the things I’d learned. ‘Looku Looku’ didn’t have a video because I was doing a lot of things at the time,” she says. “I am an independent artist so I didn’t really know how things worked and I also didn’t have enough resources like I do now.”

To her, it made sense to shoot the video for ‘Try Me.’ And after that, it didn’t make sense to go back to make a ‘Looku Looku’ video for obvious reasons. After a little break, Tems did a couple of features for Show Dem Camp, Odunsi, Khalid and Blackmagic.

She then released ‘These Days,’ ‘Damages’ and a little later her debut EP, For Broken Ears.

“I titled the EP ‘For Broken Ears’ because I wanted to bring healing to a bunch of people who haven’t been listening to music that edifies the spirit,” she says. “I wanted people to find healing, courage, hope and peace from it for many kinds of broken things.”

On the EP, Tems discussed the strains on a particular relationship more than once and she admits that her songs are based on her real experiences. However, she wouldn’t say that she was broken while making the EP.

“I would say that I was going through a journey though. Like I did overcome something and that’s why the final track, ‘The Key’ is about overcoming things by my own philosophy,” she says. “The opening track is also like how I want people to feel while listening to the EP and the kind of people I think I made the EP for.”

A key miss on ‘For Broken Ears’ was ‘These Days,’ which is as good as anything you’ll hear around. But interestingly, Tems sees the record as a quarantine record.

Since she released the EP, it’s been about working and planning. Not a lot has really changed since ‘Try Me’ got popular but she’s definitely gotten busier and she’s had to attend meetings and grant more interviews. She still finds time to create and produce amidst the busy schedule though.

In an alternate reality where Tems isn’t an artist, she would probably be “an influencer” who is known for being herself.

While she might have gotten nervous at some point in her life, Tems has also stopped feeling nervous because she knows who she is and she is confident in who she is, her purpose and her journey.

“There is nothing that I cannot do and there is no reason to feel nervous,” she emphatically says.

Tems is still independent and she’s happy where she is, but she’s open to a deal. That deal has to be worth it to her though. It must be evenly weighted and flexible with assurances on letting Tems be Tems and to amplify just that.

In the end, Tems only wants the simple things for people who listen to her music. She says she wants people to feel inspired, encouraged, empowered, confident and even like they are the “baddest” after listening to her music.