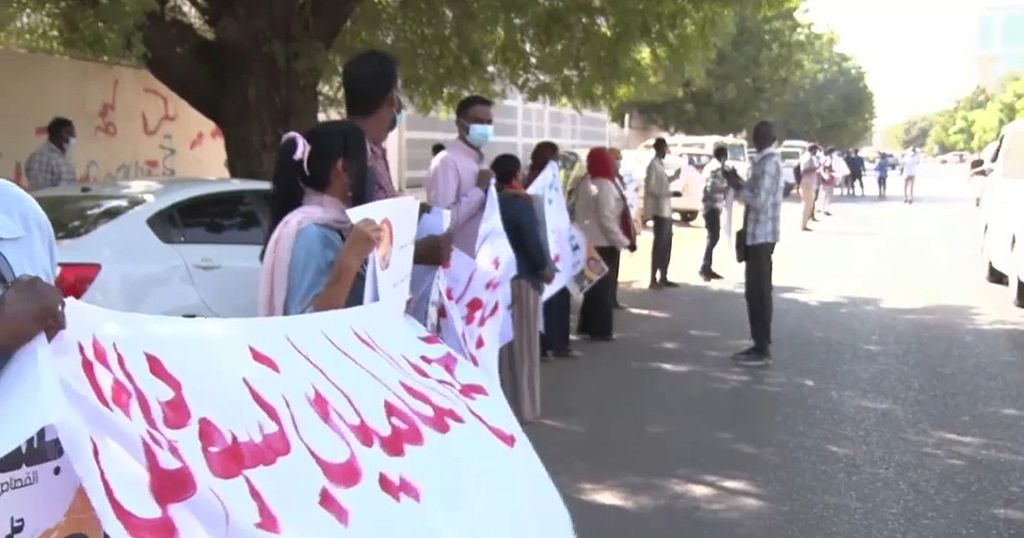 Dozens of Sudanese rallied in Khartoum on Thursday to demand the closure of illegal detention centres.

The protests came after the alleged torturing and killing of a man by a paramilitary force whose members once formed the backbone of a militia that rights groups say committed war crimes in Darfur.

The death of Bahaa el-Din Nouri, who was snatched last month while sitting at a coffee shop, has reignited the debate over the mandate of Sudan’s Rapid Support Forces (RSF), which activists have long held responsible for several human rights violations.

Men and women, raising Nouri’s photo captioned: “Why was Bahaa killed?”, formed a human chain in downtown Khartoum from the office of Sudan’s general prosecutor to the cabinet’s building, covering a 0.6 mile distance.

The rally was called for by the Sudanese Professionals’ Association, which spearheaded the popular uprising that led to the overthrown of longtime-dictator Omar al-Bashir in April 2019.

Ammar al-Baqer, an SPA member, said that the protest aims at reiterating his group’s demand “to close all illegal detention centres” and “grant the Sudanese police the exclusive authority to arrest and detain people”.

Ghada Abbas Ahmed, a protesting lawyer on Wednesday, said lawyers “can stand together along with the police and the army against detentions and extra-legal killings”.

The RSF spokesman said that the the head of the RSF’s intelligence unit as well as officers involved in Nouri’s detention and interrogation had been suspended or detained, pending an investigation into his death.

Public Prosecutor Taj al-Ser Ali al-Hebr said that the autopsy confirmed that the 42-year-old electrician died of injuries consistent with being tortured, and he has taken the necessary measures to have those implicated in Nouri’s death handed over to prosecutors.

The RSF is largely comprised of former Janjaweed militiamen who executed a brutal crackdown in Sudan’s Darfur region over the past two decades.

Rights groups have accused the Janjaweed of committing war crimes, including raping and killing civilians and burning down villages during counterinsurgency raids in Darfur and other areas of western Sudan during the conflict.

Nigeria: At least one dead, as police shoots at people during reunification