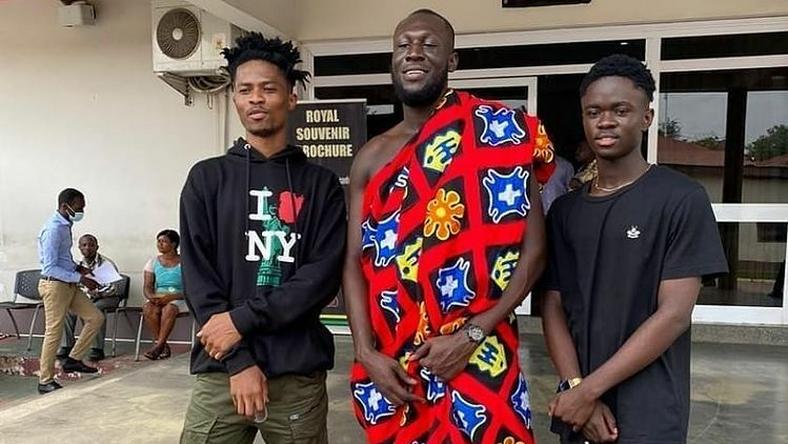 He was in the Ashante Region on the ticket of Yaw Tog – the young Kumasi-native who is known for the hit drill single “Sore” which features O`kenneth,City Boy, Reggie and Jay bahd.

The release of “Sore” in 2020 attracted international attention and appeal for his brand, especially the western world and Ghanaians in the diaspora including Michael Dapaah (Big Shaq) and Stormzy (who later linked up with him).

Stormzy, who left Accra with Kwesi Arthur for Kumasi, received a hero’s welcome and had the chance to visit Manhyia Palace – the seat of the Asantehene of Asanteman, Otumfuo Nana Osei Tutu II.

Later, he was captured in a video with some Kumerican youngsters performing the popular “Sore” song.

He was also captured wearing Kente and representing his ancestral root.

The grime star has also upheld his Ghanaian heritage.

He told Pitchfork in an interview in 2016 about how connected he feels with Ghana and West Africa, saying: “One-hundred per cent. My mum was born and raised in Ghana and has a lot of Ghanaian values and traditions and morals. All that rubbed off on me, and that’s why I have a lot of love and good energy in me—that universal energy is a Ghanaian thing. That’s why I’ve fallen in love with my country again.”

When asked if Ghana is shaping his identity as an artiste, he indicated that that ‘I love my country and my people, and the energy and vibes that they bring back.’

“I grew up as a British kid—I went to school in London, roamed the streets of London—but having these interactions with my roots and going back to Ghana, I’m like, ‘Yeah this is sick.’ I love my country and my people, and the energy and vibes that they bring back. So I want to rep that and be a part of it. I need people to know that is where I’m from,” he added.