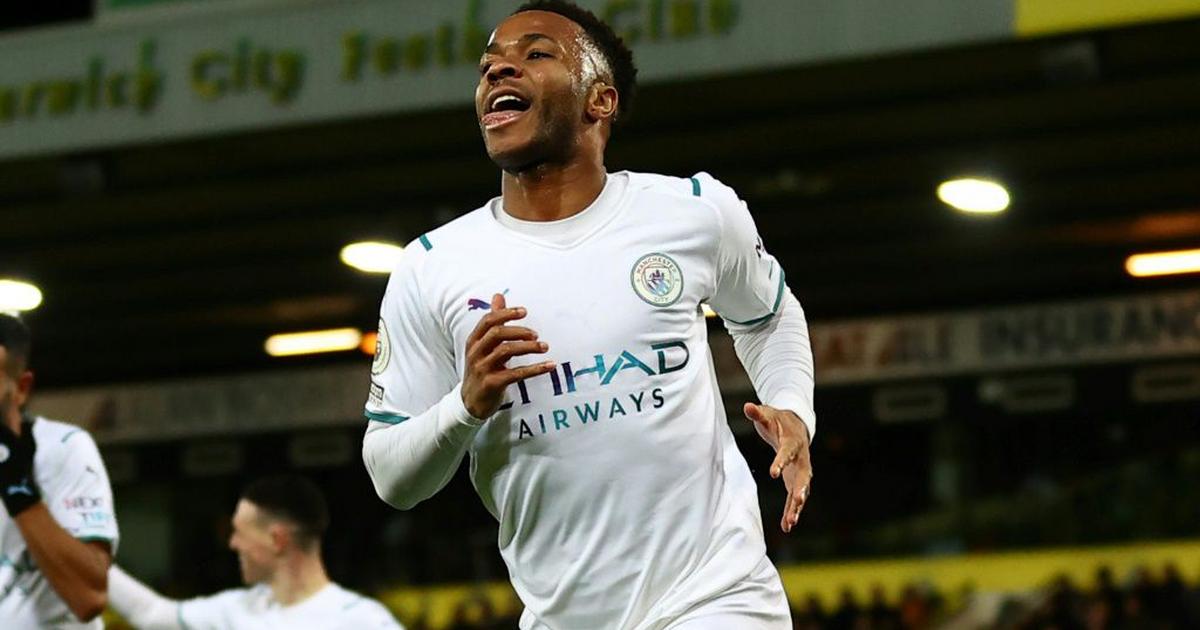 Sterling put City ahead in the first half at Carrow Road and Phil Foden doubled the champions’ lead early in the second period.

“For his confidence it will be massive, the first goal is brilliant, when Raheem executes without thinking he is excellent,” Guardiola said.

“I’m so happy for him because strikers need to score for confidence for the next games.”

Guardiola’s side are unbeaten in their last 15 league games, with 14 wins in that streak keeping them firmly on course to retain the title.

“All the time it looks easy but it is difficult to do our job and we did it again,” Guardiola said.

Second-placed Liverpool can close the gap to nine points if they win at struggling Burnley on Sunday in the first of their two games in hand on City.

Liverpool show no signs of giving up their pursuit, but City have won 18 of their last 20 matches in all competitions.

“We need a lot of points. We know what rival we have, the closest one is Liverpool. They won’t drop many points for the quality they have,” Guardiola said.

“It’s the best squad they have in the last decade. We’ll have to win a lot of games.”

On their current imperious form, reaching that target might not be much of a problem for City.

With an eye on Tuesday’s Champions League last 16 first leg at Sporting Lisbon, Guardiola made five changes from the midweek win over Brentford, with Kevin De Bruyne and Joao Cancelo among the players rested.

Bernardo Silva was inches away from giving City the perfect start when his sixth minute strike hit the post and bounced back to Norwich keeper Angus Gunn.

Third bottom Norwich had taken seven points from their past three league games to improve their prospects of staying up.

And Dean Smith’s side responded to City’s opening salvo with a spell of pressure that saw Grant Hanley meet Pierre Lees-Melou’s cross with a header that hit the post before Fernandinho scrambled it clear.

Sterling tried to put City back into the ascendancy, but his low shot from Oleksandr Zinchenko’s cross lacked the power to beat Gunn, who saved with his out-stretched boot.

It was a warning Norwich failed to heed and Sterling put City ahead in the 31st minute.

Max Aarons made a hash of clearing Kyle Walker’s cross and Sterling seized possession in the Norwich area, shifting the ball onto his right foot before curling a fine strike into the far corner.

Sterling’s 10th club goal of the season was his first since December 26.

City had won each of the last 20 Premier League matches in which they had taken the lead and Riyad Mahrez almost doubled their advantage with a near-post shot that Gunn saved alertly.

Norwich’s hopes of emulating their shock win against City on their last league visit to Norwich in 2019 were erased by Foden in the 48th minute.

Foden’s first effort from Ilkay Gundogan’s cross was blocked by Gunn, but the England midfielder latched onto the rebound and his shot squeezed over the line before Hanley could clear.

City were on cruise control and Sterling underlined their superiority in the 70th minute.

Ruben Dias rose highest to head across the six-yard box and the unmarked Sterling was perfectly placed to nod into the empty net.

Deep into stoppage-time, Hanley’s collision with Liam Delap was ruled a penalty and, although Sterling’s spot-kick was saved by Gunn, he quickly recovered to net the rebound.