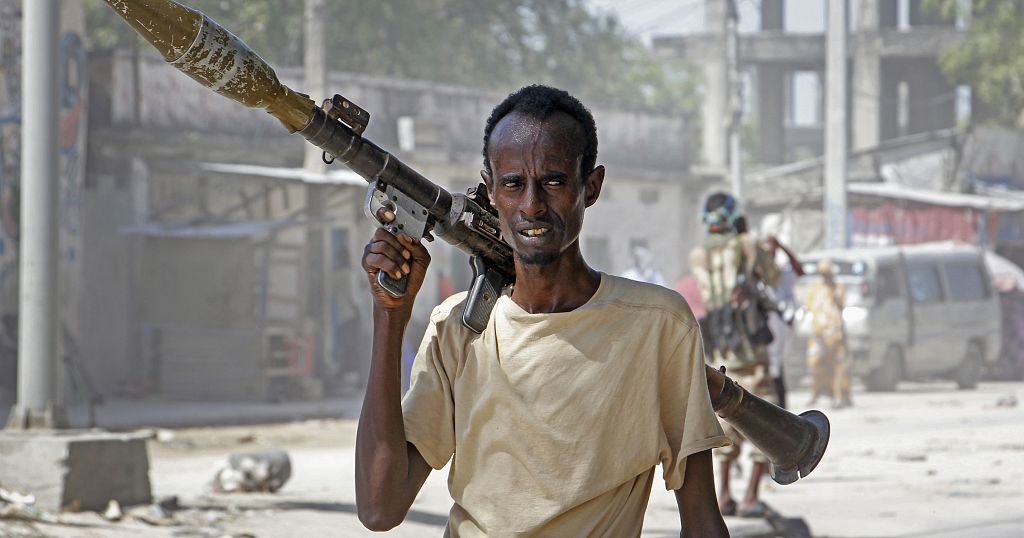 Soldiers angry over the president’s extended stay in power took up key positions across Somalia’s capital on Monday, but there was none of the gunfire that shattered the previous night in Mogadishu.

As the mutinous soldiers stationed themselves at key intersections with truck-mounted machine guns, Prime Minister Mohamed Hussein Roble called for a cease-fire and an emergency meeting to discuss the country’s security. He urged security forces “not to mingle with politics.”

But a defiant Col. Abdulqadir Mohamud Warsame, stationed along the key Maka al-Mukarrama street in the capital, said the fighting would continue if President Mohamed Abdullahi Mohamed doesn’t return to negotiations on a way out of the political standoff or resign.

“We need a government, not a dictatorship defying the norms of the land,” Warsame said.

The president faces growing opposition in Somalia and abroad after the lower house of parliament approved a two-year extension of his mandate and that of the federal government and he signed it into law it, to the fury of Senate leaders and criticism from the international community. The African Union was the latest to condemn the actions.

Somalia’s election, meant for early February, has been delayed amid disputes between the federal government and the states of Puntland and Jubbaland along with the opposition. The United Nations and others have warned that the uncertainty jeopardizes a country rebuilding from three decades of conflict.

On Sunday, hundreds of the mutinous soldiers, still in uniform, took up key positions as gunfire rang out. They are believed to have entered the city from military bases outside the capital.

Most of the soldiers belong to the clan of former presidents Hassan Sheikh Mohamud and Sharif Sheikh Ahmed, who have vowed to forcefully dislodge the president if he does not return to negotiations over the election delay or resign.

Mohamud alleged that forces loyal to the president had attacked his house. But Somalia’s homeland security minister, Hassan Hundubey Jimale, denied that and accused “some people who are not interested in the security of their people” of launching an attack in Mogadishu.

“Tonight’s unacceptable violence is instigated and led by forces that want to send Somalia back to its dark past,” the federal government said in a statement on Sunday. “Militia and foreign interference have combined to frighten the Somali people into submission.”

Residents of the capital’s Waberi district told Anadolu Agency by phone that they were still hearing heavy gunfire near the Dabka intersection located near the presidential palace.

“Tonight’s unacceptable violence is instigated and led by forces that want to send Somalia back to its dark past. Militia and foreign interference have combined to frighten the #Somali people into submission. This will NOT happen. We will defend our people,” said a statement by the state-run Somali National News Agency (SONNA).

Somali opposition fighters took up positions in parts of the tense capital on Monday, a day after clashes with government troops erupted over the president’s bid to extend his mandate.

Witnesses reported that armed men and vehicles mounted with machine guns were stationed in opposition strongholds, while key roads in Mogadishu were blocked.

“Both the Somali security forces and the pro-opposition fighters have taken positions along some key roads,” witness Abdullahi Mire told AFP.

Somalia, already fragile after decades of civil war and an Islamist insurgency, is facing its worst political crisis in recent years after the failure to hold planned elections in February.

President Mohamed Abdullahi Mohamed, best known by his nickname Farmajo, has faced harsh criticism from foreign allies after signing a law approved by parliament which extended his mandate by two years.

On Sunday night, sporadic bursts of heavy gunfire rang out across the capital after fighting broke out between government forces and soldiers allied — mainly by all-important clan ties — to the various opposition leaders.

The clashes — mainly in the northern neighborhoods of Sanca and Marinaya and the busy KM4 crossroads in the center — began after dozens of opposition supporters marched in protest against Farmajo’s term extension.

There were no immediate reports of casualties.

Tensions remained high on Monday, with some people trying to leave their homes in tense neighborhoods.

“People are starting to flee from Bermudo area where the pro-opposition fighters have taken positions last night, the situation is tense and there can be an armed confrontation anytime if the situation remains the same,” Fadumo Ali, a resident of one of the tense neighborhoods told AFP.

Mogadishu residents urged both sides to stop fighting and complained that electricity and water had been cut.

“We need both sides to stop the fighting, have sympathy with the children and elderly,” said Farah Hassan.

“There is no fighting, but the government forces are also stationed a few blocks away.”

The former president Mohamud said Sunday that “forces loyal to” Farmajo had attacked his house, which the government denied.

“Earlier today, our forces foiled several attempted attacks against the public and shut down the organized militia who entered the capital with an aim of instilling fear and panic among the public,” the internal security ministry said in a statement.

While schools and universities were closed, life in some of the unaffected neighborhoods proceeded much as usual.

Somalia’s prime minister, Mohamed Hussein Roble, told a press conference Monday he was “disappointed with the violence aimed at destabilizing peace and stability in Mogadishu during the holy month of Ramadan.”

He urged security forces to “fulfill their national commitment and protect the stability of the people in Mogadishu.”

Farmajo’s four-year mandate expired in February before fresh elections could be held, leading to a constitutional crisis and to opposition leaders refusing to recognize him.

The crisis mushroomed from a long-simmering disagreement between Farmajo and the leaders of Puntland and Jubaland, two of Somalia’s five semi-autonomous states, over how to conduct elections.

Multiple rounds of talks failed to find a solution, and parliament pushed through the bill extending his mandate for two years.

The crisis in Somalia has led to increasing dismay from the country’s foreign backers, who have called on Farmajo to return to dialogue with leaders of the country’s five federal states over the holding of elections.

The British embassy and European Union envoy in Mogadishu expressed alarm over the violence.

The UN Mission in Somalia wrote on Twitter it was “deeply concerned about clashes occurring in Mogadishu. We urge calm and maximum restraint by all parties. Violence is not the solution to the current political stalemate.”