The River actor, Hlomla Dandala has left fans feeling slightly confused, after he celebrated his 20th marriage anniversary to his ex-wife Candy Litchfield. 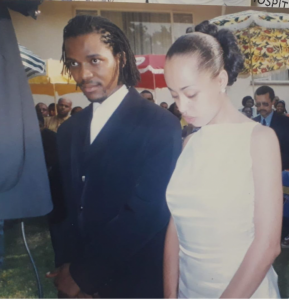 What left fans more confused was the fact that Hlomla Dandala and Candy Litchfield divorced in 2013.

After his divorce from Candy, Hlomla went on to marry Brenda Nyakudya, whom he also divorced.

While industry colleagues and some fans congratulated the actor, some fans asked if it meant they were back together again.

The actor didn’t reply to the comments so fans were left to their own interpretation of the situation.

Hlomla Dandala married television personality Candy Litchfield, popularly known as Miss Candy in 2000 and they were one of Mzansi’s hottest couples.

Sadly, the couple pulled a plug on their relationship in 2009, but what was more shocking, were revelations that they had not been living as man and wife for some years, before their divorce.

Hlomla was accused of cheating on Candy with other women and having sired kids with them, but he denied ever cheating on her, saying he and Candy were already separated when he started seeing other women.

Hlomla Dandala then married Brenda Nyakudya and it also ended in tears when he allegedly caught her cheating on him with another man in their house.

He made headlines when he put the man on blast on social media, for allegedly sleeping with Brenda when she was married to him.

Now fans are wondering if he’s back with Candy or he was just reminiscing.