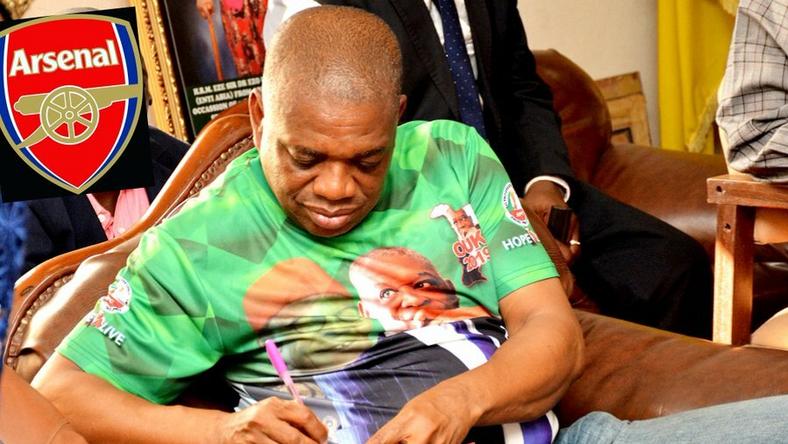 Kalu who has a history of investing in local sporting sides, says he’s well placed to do with Arsenal what he did with Enyimba of Aba–galvanizing the football club into winning an elusive African Champions League trophy for Nigeria in 2003 and repeating the feat the following season.

“Our success with Enyimba FC between 2000-2007 has continuously increased my passion for football. As the pillar of sports in Africa, I am considering an investment in football and I will buy 35 percent stake in Arsenal FC.

“Our target is to lift the Champions League and EPL back to back as we did with Enyimba,” Kalu shared in a series of tweets.

In December of 2019, Kalu was convicted of perpetrating fraud to the tune of N7.1 billion during his spell as governor of the southeast state of Abia from 1999 to 2007.

He was subsequently sentenced to 12 years behind bars.

He served six months at the Kuje prison for his crimes.

On May 8, 2020, the Supreme Court overturned the judgment of the Federal High Court which found Kalu guilty, on the basis of a technicality, and set the lawmaker free.

Kalu is not the first Nigerian billionaire businessman to express an interest in acquiring Arsenal. Africa’s and Nigeria’s richest man, Aliko Dangote, has repeatedly told anyone who cares to listen that he’ll buy Arsenal someday.

Arsenal is widely followed in Nigeria, Africa’s most populous nation and largest economy.