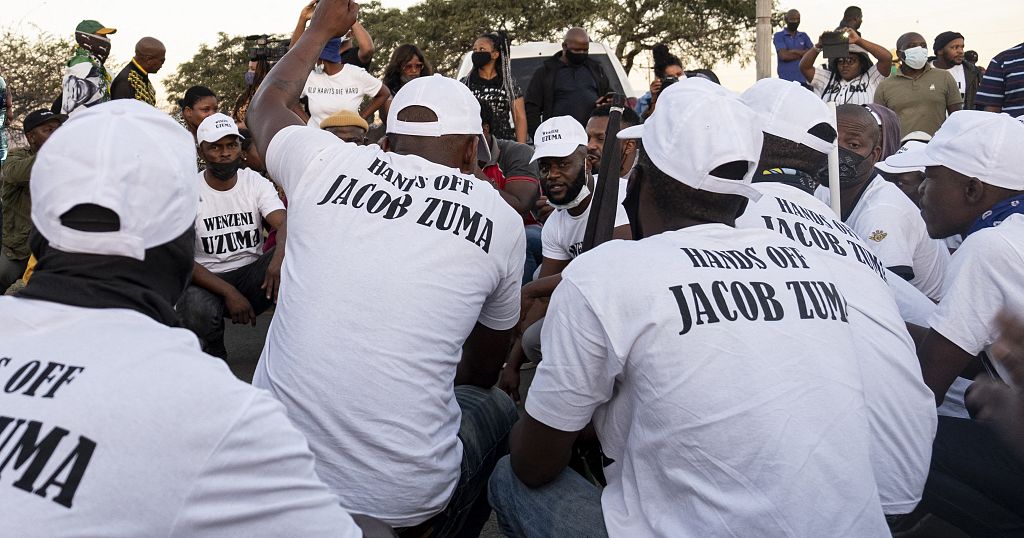 Supporters gathered outside the rural home of South Africa’s ex-president Jacob Zuma on Friday in a show of solidarity as he faced a deadline for surrendering to police for contempt of court.

In an unprecedented ruling, the Constitutional Court on Tuesday handed Zuma a 15-month jail term for repeatedly refusing to comply with an order to appear before graft investigators.

If the 79-year-old fails to turn himself in by Sunday, police will be given a further three days to arrest him and take him to jail to start the sentence.

Local media on Friday said that according to a warrant of committal, Zuma would be taken to Westville Prison, about 200 kilometres (120 miles) from Nkandla in southeastern Kwa-Zulu Natal province.

About two dozen women who said they travelled more than 300 kilometres (190 miles) overnight from O.R. Tambo district in the neighbouring Eastern Cape province camped at the entrance to Zuma’s home.

“We support Zuma and we want to know what is going to happen with him, which is why we are here,” 43-year-old Cecilia Nongce, wearing a traditional Nguni blue-and-red blanket to ward off the cold, told journalists outside Zuma’s home.

“We love Nxamala,” she said in Zulu, referring to Zuma by his clan name, adding that they hoped he would come out to speak to them.

A group of other supporters arrived in two mini-buses waving ANC flags and wearing white T-shirts with the inscription ‘wenzeni uZuma’, Zulu for “What has Zuma done?”

A few vendors set up stalls at the gate to Zuma’s homestead, selling food and African National Congress (ANC) regalia, as goats roamed in and out of the compound.

A big blue tent and a small red one was erected to shelter members of the veterans of ANC’s armed struggle wing Umkhonto we Sizwe, who have staunchly stood behind Zuma in recent years.

As the deadline loomed, Zuma pleaded on Friday that the order be “reconsidered and rescinded.”

“It will not be futile,” Zuma said in papers filed to the court, “to make one last attempt to invite the Constitutional Court to relook its decision and to merely reassess whether it has acted within the constitution or, erroneously, beyond the powers vested in the court by the constitution.”

He cited his “own unstable state of health… it is my physical life that the incarceration order threatens.” He said it was “no exaggeration to label (the ruling) as cruel and degrading punishment.”

In this light, Zuma argued, he believed he was entitled to a court that would examine his request “with dispassionate interest but a keen sense of judicial duty and independence.”

Zuma’s attempts to get the judges to “change their minds” is futile, according to Cathleen Powell, a University of Cape Town law professor. “It has no chance of happening.”

According to a copy of a warrant of committal seen on Friday, Zuma would be taken to Westville Prison in southeastern Kwa-Zulu Natal province.

Zuma’s nine years were stained by scandal and allegations of graft, ending disastrously in 2018 when he was forced out by the ruling ANC and replaced as president by Cyril Ramaphosa.

But he is also charismatic, rising from herdboy to the presidency, and is one of the historic figures in the fight against apartheid, spending 10 years in prison at notorious Robben Island.

He retains a deeply loyal network of lawmakers, officials and grassroots supporters on the left flank of the ANC.

“We will not allow president Zuma to go to jail,” said Carl Niehaus, a close friend of Zuma and a former ANC spokesman. “We will be uncompromising.” “Zuma wants to see a reasonable resolution of this situation,” he told AFP.

Apparently fearing a showdown, the ANC said it had postponed a scheduled meeting of its top National Executive Committee this weekend.

“Officials were mindful of the situation developing in Kwa-Zulu Natal and the need for the ANC to give clear and principled leadership to ensure the maintenance of the rule of law and to avoid any violence, injury, or loss of life,” the party said in a statement.

Zuma is separately due in court in July facing 16 charges of fraud, graft and racketeering relating to a 1999 purchase of fighter jets, patrol boats and military gear from five European arms firms for 30 billion rand, then the equivalent of nearly $5 billion (4.2 billion euros).