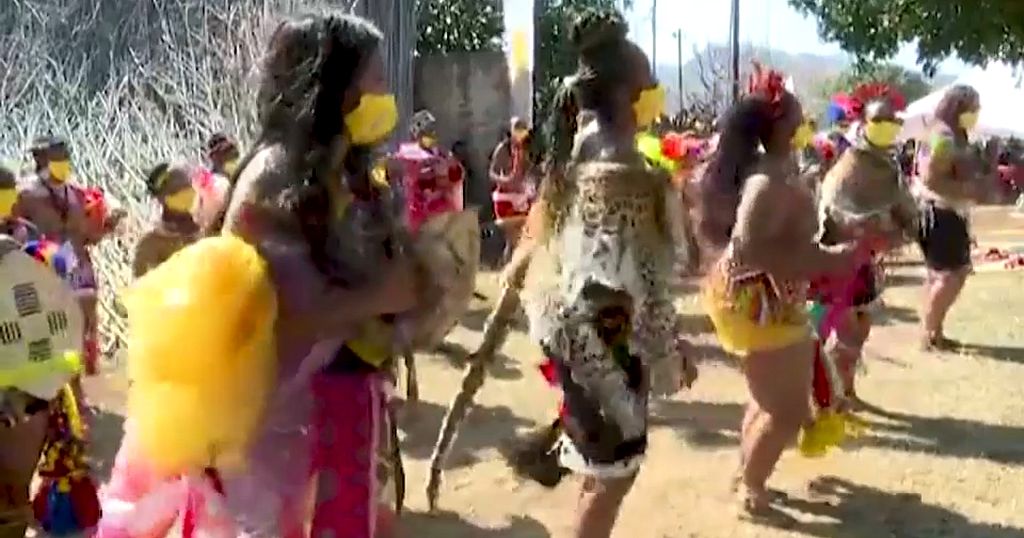 The king invited only 30 maidens to his eNyokeni Royal Palace for the annual highlight which usually attracts thousands of virgins.

Every September tens of thousands of bare-breasted young women descend on the traditional royal residence in Nongoma, KwaZulu Natal for the reed dance.

Adorned in colourful beads, they celebrate their virginity by dancing before the Zulu king holding long reeds which they later present to him.

The ancient cultural rite of passage to womanhood was revived officially by the Zulu king in 1984.

But on Saturday, the ceremony, known for promoting sexual abstinence by young women to reduce HIV transmission, was held with only 30 participants. Others were forced to watch it on social media.

And instead of presenting the king with reeds, this year’s 30 maidens who also wore masks, carried placards calling for an end to gender based violence (GBV).

In his keynote address, the traditional leader threw his support behind South African women affected by GBV.

“I want women to rest assured that I am in their corner,” Zwelithini said in the address which was broadcast on various social media platforms.

“I commit myself to your safety for as long as I live…. This is a war that I and all who identify themselves as Zulus embrace.”

South Africa had been grappling with the problem of violence against women long before the coronavirus lockdown in the country.

But the number of victims has surged since the lockdown instituted by President Cyril Ramaphosa in March.

More than 120,000 victims rang the national helpline for abused women and children in the first three weeks after the lockdown started on 27 March — double the usual number of calls.

In the KwaZulu Natal south coast, terror has also gripped communities after a string of women’s bodies were uncovered within six months on sugar cane farms and open fields in the Mtwalume area, sparking fears of a serial killer on the loose.

“We must not take this as a norm because no nation that allows the killing of women deserves respect,” implored the Zulu monarch.

South Africa has so far registered 635,078 coronavirus infections and 14,678 deaths.