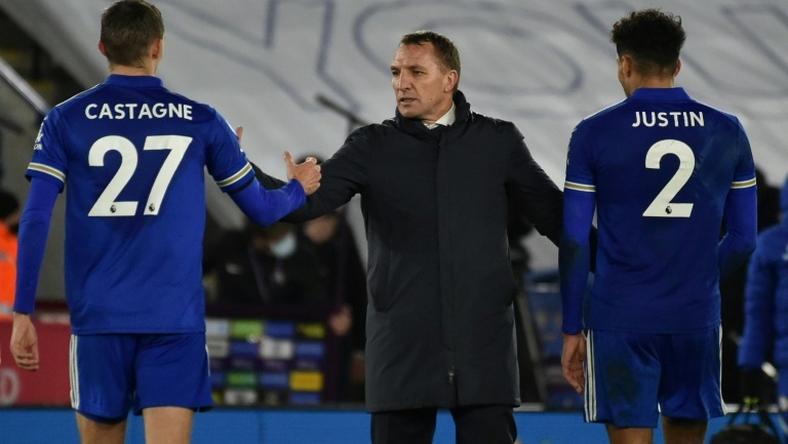 Leicester sit atop the table after beating a lacklustre Chelsea 2-0 on Tuesday although both the Manchester clubs can go above them if they win their respective matches later on Wednesday.

Leicester’s points tally this season stands comparison to their total when they won the title.

In that campaign, they were second to Arsenal with 39 points at the midway point, while they now have just one point less from the same number of matches.

Rodgers, though, is wary of any such comparisons especially as his side faded in the run in to the title race last term and lost out on a Champions League spot.

Rodgers, who went agonisingly close to lifting the trophy with Liverpool in the 2013/14 campaign, used Tuesday’s opponents and their fellow London club Tottenham Hotspur as examples of what a moveable feast the race for the title is.

“I don’t really think about it, it’s something which gets floated about and we have seen it all season,” he said.

“Tottenham a few weeks ago and Chelsea themselves, five or six weeks ago everyone was talking about them.

“The quality of Manchester City, Liverpool are the champions and Manchester United have been great.

“For Leicester to be up with the level of teams who are there makes me really happy.

“It’s going to be a huge challenge to be up there but we are happy to take on that challenge.”

Rodgers is reportedly one of Chelsea’s targets should Roman Abramovich fire Frank Lampard after a poor run of form.

However, Rodgers — who was on the Chelsea coaching staff from 2004-08 — is focussed on the great unity within his present side which has been one of their strengths.

“You have seen the real spirit of the side tonight,” said the 47-year-old Northern Irishman.

“We were a real threat going forward.

“The performance and maturity of the team was pleasing. I knew we were playing against a talented team and we had to be right on our game.”