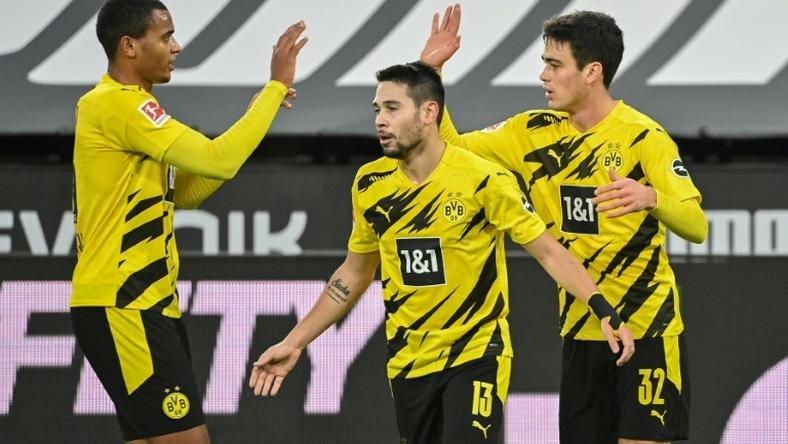 Reyna, who marked his 18th birthday in November by extending his contract until 2025, scored his first Bundesliga goal on the opening day of this season.

He has featured in all of Dortmund’s Bundesliga and Champions League games in 2020/21, scoring three league goals – including the equaliser in a 1-1 draw at Frankfurt – and producing six assists.

Reyna, an attacking midfielder who can play on either wing, needs a strong performance at home to Wolfsburg on Sunday after Dortmund’s shock 2-1 defeat to Union Berlin a fortnight ago.

The result left Dortmund fifth in the league, eight points behind leaders Bayern Munich, who host Mainz on Sunday.

Against Wolfsburg, Dortmund could welcome back striker Erling Braut Haaland, who scored ten Bundesliga goals in eight games before being sidelined by a hip injury.

Having forced his way into the Dortmund first-team, Reyna now wants to emulate Haaland and England winger Jadon Sancho, both 20, by deciding games.

“You see guys like Sancho and Haaland – I want to be at their level,” Reyna told The Players’ Tribune.

“I know I can make that jump this season. I’ve come out of my shell. I now demand the ball.”

Shortly after his 17th birthday last January, Reyna made his Dortmund debut, then bagged his first senior goal in February with a jaw-dropping strike in a German Cup game at Bremen.

He marked his Champions League debut the same month with a brilliant pass to set up Haaland for the winning goal in the last 16, first-leg victory over Paris Saint Germain.

His defensive work was exposed when Union’s Liverpool loanee Taiwo Awoniyi got in front of him to head home.

Dortmund fielded a youthful side in Berlin where Haaland’s understudy Youssoufa Moukoko became the league’s youngest goal-scorer at 16 years, 28 days.

Down in Bavaria, European champions Bayern Munich are also giving youth a chance.

Before this season, double Champions League winners Thomas Mueller and David Alaba, who graduated from Bayern’s academy more than a decade ago, were the last first-team players to come up through the club’s youth structure.

That has all changed with 17-year-olds Jamal Musiala and Bright Arrey-Mbi, plus Angelo Stiller, 19, given game time this season for the European champions by Hansi Flick.

As Alphonso Davies proved last season in making the left-back berth his own as a then 19-year-old, Flick cares more about talent than age.

“Finally, we once again have a few players on our (academy) campus who are breaking through,” said Bayern chairman Karl-Heinz Rummenigge.

Of Bayern’s trio of teens, Musiala has made the biggest impact.

The attacking midfielder, who can also play on the left, became the club’s youngest goal-scorer during the 8-0 demolition of Schalke on the opening day of this season.

Born in Stuttgart – his mother is German – Musiala moved to London as a child and rose through Chelsea’s academy before joining Bayern’s youth structure last year.

Shortly after earning his first England Under-21 cap in November, Musiala then came off Bayern’s bench and scored with a superb strike in the 3-3 draw against RB Leipzig.

“We’re very happy about Musiala’s development, he’s very calm on the ball and the football world can look forward to what will come of this young talent,” Flick said recently.

Musiala also hit the post in Bayern’s 2-1 win at Bayer Leverkusen which put them top a week before Christmas.

His obvious talent has drawn the attention of Germany team director Oliver Bierhoff, who hopes to persuade Musiala to play for the country of his birth rather than England.

“We’re watching him, because of his German FA past and his current performances,” Bierhoff recently said of Muisala, a rarity having played for Germany Under-16s as well as England’s juniors.