Five years later at 23, she released he debut album, Rose Gold in October 2017. This came after several warm-up features including the impeccable Trapsoul record, ‘On It’ alongside DJ Slique and her own single, ‘Suited.’

The album was a dreamy-eyed appreciation of the shiny side to love and life with a jejune innocence. At times, she was even jocund and anodyne. Her art for the album showed her gorgeous face enjoying nature and peace with a dash of sunlight.

She produced classic records like ‘The Sound,’ ‘Power To She’ and ‘Rose Gold’ from her platinum-certified debut album.

Now 26 and after two postponements [November 2020 and April 2020], she released Trouble In Paradise in May 2021. While the album initially continued on the amorous path of ‘Rose Gold,’ it took on some grown, depressive topics of heartbreak and the stages of grief. 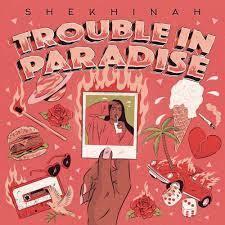 While her sound still experiments with Pop, Piano-based Ballad, Synth Pop and Electronic synths within her primary R&B leaning, her album art took a turn for the abstract reflection of heartbreak and its coping mechanisms, even though it remains colorful.

Glasses are a metaphor for tears, music helps the dark times and so does overfeeding on sweeteners and fatty foods. Smoking some herbs is also a welcome distraction.

This is because ‘Trouble In Paradise’ is a tale of blissful love-turned-sour. But even when the love was great on the first four tracks, it was a one-sided tale of longing, desire and focus, where Shekhinah was simply articulating her needs and wishes.

Shekhinah’s character is particularly pained on ‘Fall Apart’ because her loyalty, which she discusses on ‘Fixate,’ was betrayed and taken for granted.

On ‘I Love It Here,’ it is revealed that Shekhinah and the ex she sings about met each other as teenagers in high school. On ‘Diamonds Go,’ it is also revealed that they lived together, which suggests that the failed relationship was longterm.

With seamless album sequencing/tracklisting and imaginative songwriting – barring ‘Beautiful,’ which should have come earlier, Shekhinah tells a beautiful story that even gleans the stages of grief.

Even though Shekhinah and her lover [played by Una Rams when it mattered] both admit that they still love each other on ‘Pick Up’ and Shekhinah has dreams of having a ‘Wedding Song,’ she is forced to accept the end of her relationship on ‘I Love It Here.’

But when she was fresh from the breakup, she was ‘Insecure.’

With her songwriting and the deft use of her vocals, Shekhinah also proves that she is adept at projecting both sides of an emotion. When she is happy on the opening four tracks, it is apparent and the emotions are clear from her vocal use when she is sad.

Props must also go to Shekhinah’s A&R for creativity. Just like her first four tracks were happy and filled with amorous longings, her final four tracks are filled with mental notes and odes to her lover, on her way to acceptance of the end.

The four tracks in the middle see Shekhinah document the ‘Questions’ which crash her relationship and the ensuing denial on ‘Pick Up.’

“Women Are Not Weaker Vessels, What A Man Can Do A Woman Can Do It Better”-Rapper, Eno Barony Says