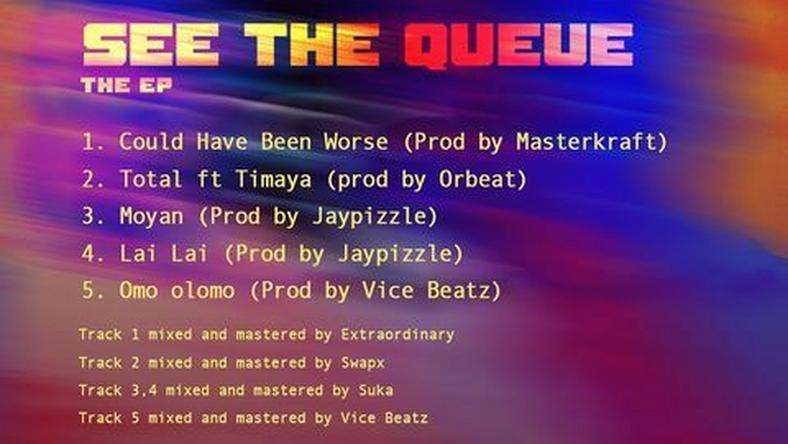 Equally unknown to many; that car is a Chevrolet Camarro. In the heydays of his career, he “feels blessed.” He understands the odds he’s beaten to get to this level and he doesn’t look at what he doesn’t have. Word on the street says CDQ could have worked in a bank, but the allure of the music was too great to refuse.

Now, he’s here with the heart of a lion and an EP titled after the infamous MI Abaga diss record, ‘The Viper.’ On it Abaga diss Vector with, “You’re not even top five from Yoruba land, Mode, Eldee, Baddo, Dagrin… omo, see the queue [CDQ]…” as a reference to CDQ. Now, CDQ’s fifth body of work in a rich discography is titled, See The Queue.

Make no mistake, ‘Could Have Been Worse’ is laced with some bars. ‘Total’ is more an Afro-pop record which features the hook prowess of the veteran, Timaya. “Ice on my neck like say I dey sell gold…” is an understandable line, but it’s a weak bar. Gold isn’t diamond in the grand scheme.

However, “Iroko t’o gba’bode ko le r’ewe b’ora…” is an elite bar. In English that means, “The abominable iroko will never have leaves…” That’s on some Pete Edochie nuggets… The record continues the vote of gratitude that CDQ started on ‘Could Have Been Worse.’

Both Timaya and CDQ might catch some smoke for their praise of Mompha and especially, Hushpuppi but a lot will depend on when this record was made. From there, CDQ went into South Africa for Amapiano and Gqom sounds. ‘Moyan’ is a shortened version of ‘Won fe moyan…’

In Pidgin that means, ‘Dem wan know person…‘ This looks like the most hit-worthy record on this EP. However, it’s greatest impediment might be with Jaypizzle‘s mistake of not increasing the volume on that bass – it would have taken this record from a ‘6’ to an instant 8/10.

A lot of that problem seems down to Nigerian producers and their singular idea of what Amapiano should be. They feel it should be more about the percussion than the melody, but no genre deserves dogmatic recreation. Amapiano is at its best when it accomodates melodies. Nonetheless, ‘Moyan‘ has a lot of potential.

The Electro-House record, ‘Lai Lai’ is topically sound. CDQ discussed his love for a beautiful Christian woman with a 210 IQ. It seems an ode to a Christian lady that he, the Muslim kid fell in love with. But musically, the record is a weak poor man’s version of ‘Skeleton Move’ by Master KG.

‘Omo Olomo’ brings back the Hip-Hop as CDQ went into his Trap bag to celebrate his ‘Ibile’ background. What a record…

CDQ’s projects might never get the appreciation they deserve because his brand has one fault; when people think of CDQ, they don’t think ‘albums.’ For that reason, his album will sail under radars, even when they deserve great love. It’s something that he has to fix.

Secondly, the entire project is filled with gratitude and personal topics that relate to CDQ’s journey and where he currently stands. He also feels comfortable and proud of what he’s been able to achieve. However, that entire spirit seems at loggerhead with the EP’s title. At best, it’s shrouded in cluster.

Finally, some of these songs are just too long. Tracks two, three and four should not have been more than three minutes each.

Nonetheless, this project has a measure of replay value.