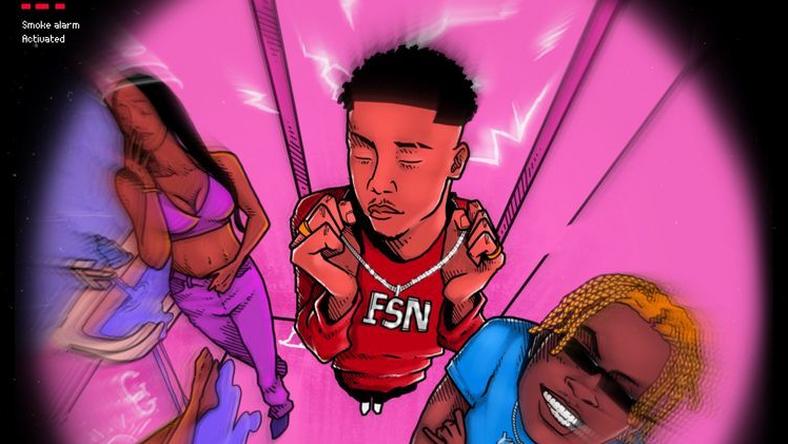 During an interview with More Branches, Azanti revealed that he got familiar with Psycho YP after he sent the recent university graduate some songs for his opinion. YP replied with a couple of fire emojis and the rest has since been history. At 17, the sky looks like the limit for Azanti.

A couple of weeks ago, Vice President of Market Development, Africa and Diaspora Markets, Ezegozie Eze posted their fascinating story on his Instagram page. As a cut from a voice note/call that YP sent to/had with Azanti revealed on ‘Posted Up,’ even YP was surprised at Azanti’s age as against his talent.

YP then revealed that he saw a bit of himself in Azanti, who has since joined Apex Village – the collective that houses YP, Zilla Oaks, Kuddi Is Dead and other young, talented Abuja-based artists. While YP carries an identity as a Rapper/Trapper, his sound has evolved since YPSZN.

Beginning with ‘Be Like You,’ his growth and willingness to release his experimental content became apparent and more so on YPSZN2. This year, he has experimented with Drill and now, he’s on R&B/R&B-Fusion with a ting of Afro-pop.

On the other hand, Azanti told More Branches that R&B Fusion seems like a good description for his music. ‘YP & Azanti, Vol. 1’ is a rainbow of music and a bed of solfa roses.

The project is led by two singles, the Bashment track, ‘Focused’ and the Afro-pop record, ‘Caro.’ Both tracks are cut from the hue of love, affection and relationship. While ‘Focused’ is a ploy for monogamy, ‘Caro’ seems more like a post-breakup song.

By the Afro-Fusion element of ‘Ji Masun,’ one thing becomes clear; Azanti can really write. While there are subtle points of similarity that help clarify YP’s interest in Azanti, it’s Azanti’s songwriting that really stands out – the boy has something to say, he’s not just producing Yoruba-backed lamba.

On the other hand, it’s amazing how YP never fully relinquishes his Rapper side on even the most danceable beats. More so, he always sounds in place and isn’t as topically limited as a lot of Trappers.

His range is also growing faster than you can say ‘O.’ His ‘moment’ in the spotlight is getting more inevitable now.

As the Twitter page of A Music In Time Podcast by OG media personality, Osagie Alonge tweeted some weeks ago, all YP needs right now is ‘that song’ to really take off. However, one also hopes that he doesn’t excessively focus on finding that song because that would be risky.

Going forward, YP should focus more on original topics, not the aspirational content of Benzes and Porsches that we dream of and put in music. That said, Azanti couldn’t have found a better person to work with. Working with YP would improve and stretch his artistry beyond his imagination. Already he told More Branches that he was doing Drill.

‘Posted Up’ and ‘Nobody’ are the quintessential R&B/TrapSoul records. ‘Posted Up’ sees a sprung Azanti utilize his growing powers of a hook and his pen to perfection. It’s nice to see him on the track as a solo artist. ‘Long Way From Home’ is YP’s moment as he moves into his Trap element – it should have been track eight though, not track seven.

‘Nobody’ is one of the best R&B songs that Nigeria has seen in 2020 and ‘New Bag’ should be Nigeria’s song of the week – this writer hopes the song gets a Bella Shmurda remix and a video. ‘Caro’ should have also come before ‘New Bag.’

Psycho YP and his obsession with a Rolls Royce Wraith needs a better study though. Here is hoping he gets to buy himself one soon…