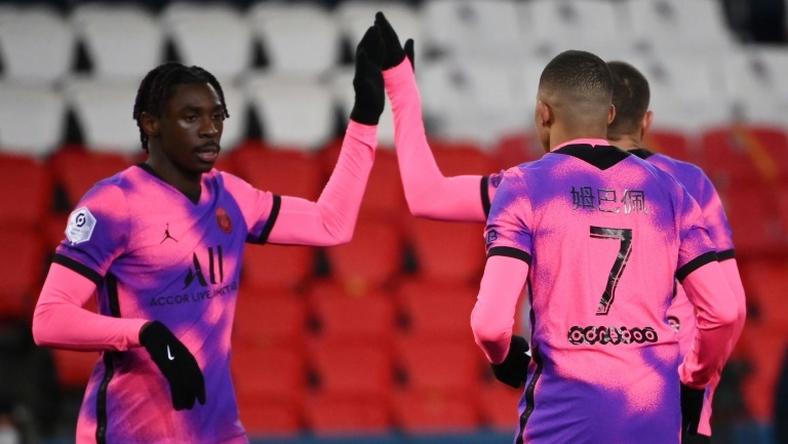 Kean struck in the 76th minute for his 10th Ligue 1 goal since joining PSG on loan from Everton at the start of the season, handing Mauricio Pochettino’s side the points after Julian Draxler’s opener had been cancelled out by Rony Lopes at a freezing Parc des Princes.

The result allowed the reigning champions to go provisionally top of the table on goal difference from Lille, who play Brest at home on Sunday. Lyon are two points back in third but can climb to the summit with a win at home to Montpellier later on Saturday.

PSG are expected to be without Neymar for at least the next three weeks after the world’s most expensive player came off with a groin injury in a midweek French Cup win at second-tier Caen, a huge blow ahead of the Champions League last 16, first leg in Barcelona on Tuesday.

With Angel di Maria also out for that game, Pochettino handed starts to Kean and Mauro Icardi alongside Kylian Mbappe in attack against Nice, as PSG sported a pink and violet-coloured fourth kit with player names on the back in Mandarin to mark the Lunar New Year.

The new look inspired the home side to go in front midway through the first half thanks to Draxler, who followed up to score after Icardi had turned Thilo Kehrer’s cross onto the post, the German scoring on his first league start since October.

However, a Nice side who have struggled badly for form this season drew level five minutes into the second half when Marquinhos attempted a pass out from the back but only succeeded in finding Lopes, who picked up the ball on the edge of the box and fired high into the net.

Keylor Navas then turned Amine Gouiri’s shot onto the bar with PSG on the ropes, but Pochettino’s side grabbed the winner with just under quarter of an hour left.

Mbappe’s cross from the left to the back post was returned into the six-yard area by Icardi, and Kean headed in.