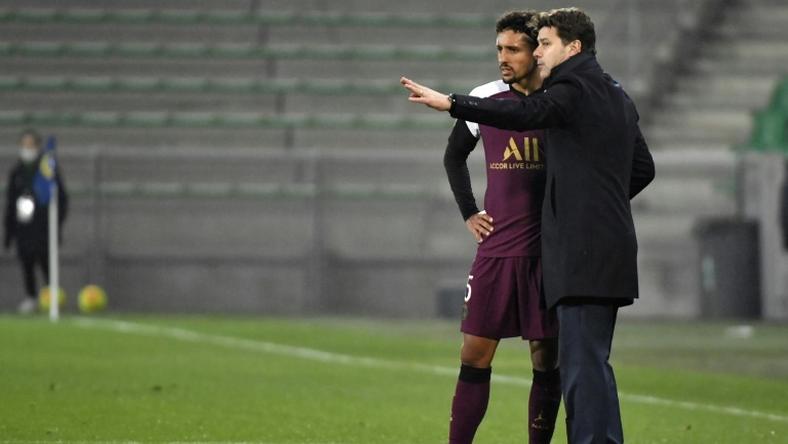 The defending league champions fell behind early on to Romain Hamouma’s strike before Moise Kean levelled soon after, but laboured in the second half and failed to find a winner.

The former Tottenham boss was only confirmed as Thomas Tuchel’s successor on Saturday, four days after the German’s sacking was officially announced.

But the scale of the task facing the former PSG defender was laid out in front of him at the Stade Geoffroy-Guichard as the capital-city giants’ title defence suffered another blow.

Lyon survived a late Lens comeback to extend their lead with a 3-2 win, with Memphis Depay’s double proving crucial.

PSG did move into second, above Lille on goal difference, after Christophe Galtier’s team slipped to a surprise 2-1 home loss to Angers.

Pochettino made just two changes to the final starting XI selected by Tuchel for the 4-0 win over Strasbourg before the winter break, with Moise Kean and Idrissa Gueye returning in place of Rafinha and Timothee Pembele.

PSG started well going forwards but looked vulnerable at the back and were made to pay in the 19th minute as Gueye carelessly lost possession on the edge of his own area.

Denis Bouanga had plenty of time to pick out Romain Hamouma, who tapped into the net.

But the visitors wasted little time in equalising as Kean repaid Pochettino’s faith to score the first goal of the Argentinian’s era, spinning and firing home after Marco Verratti’s pass.

The Italian striker has now scored 10 goals for PSG since joining on loan from Everton in the close season.

But Les Verts, bidding to extend their unbeaten run to seven matches, continued to find gaping holes in the away defence and Keylor Navas had to make a smart, diving save to keep out Mathieu Debuchy’s volley.

Paris dominated possession early in the second period, but Saint-Etienne had the better chances, with Bouanga denied by Navas and Hamouma having a penalty appeal turned down.

PSG started to pile on the pressure in the final 15 minutes, with Angel Di Maria forcing home goalkeeper Jessy Moulin into a smart low stop after Kylian Mbappe’s clever dummy.

At Groupama Stadium, Lyon raced into a three-goal lead over Lens through Depay’s brace and a Steven Fortes own goal.

Rudi Garcia’s OL, who led the top flight at Christmas for the first time since 2008, held on for a vital three points despite Florian Sotoca and Cheick Oumar Doucoure hitting back for Lens.

Lille, who were level on points with Lyon heading into the day, dropped to third as Romain Thomas scored twice in the first 10 minutes for Angers at the Stade Pierre-Mauroy.

Burak Yilmaz pulled one back before the interval but the away side held on.

Andre-Villas Boas’ men are fifth, but only eight points behind Lyon with two games in hand.

“We have laid the first stone,” said Domenech, who led France to the 2006 World Cup final.

“Now we must continue to improve.”

Monaco moved into fifth with a 5-2 victory at 10-man Lorient, with Aleksandr Golovin and Kevin Volland among the scorers.