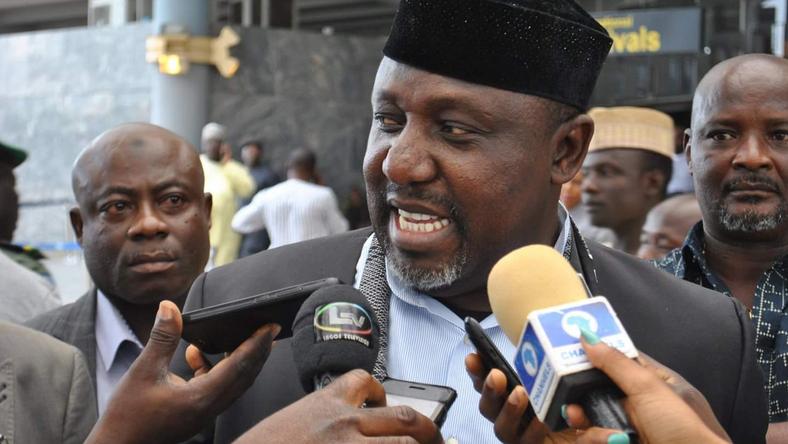 Uzodinma and Okorocha have never been the best of friends even though they belong to the same political party, the All Progressives Congress (APC).

On Sunday, February 21, 2021, a fight broke out between Okorocha and Uzodinma loyalists at the Royal Palm Hotel.

Okorocha had stormed the estate to break the locks on the gate, even though the property, which allegedly belongs to Okorocha’s wife, Nkechi, is the subject of litigation and investigation by the state government.

Okorocha was thereafter arrested and taken away by the police after a heated verbal exchange involving all parties concerned. Reports say cars were also destroyed on the scene.

Orlando Ikeokwu who is the Imo police spokesperson says the lawmaker was invited for questioning and was later released on Sunday night.

“He was released later at night. If anybody is found culpable, definitely, he will be charged to court,” Ikeokwu said on a ChannelsTV programme.

“If investigation proves that he [Okorocha] has committed an offence, he will be charged to court.”

Okorocha has alleged that police officers watched as thugs attacked his associates with machetes.

“I came back from an occasion and proceeded to Royal Palm Hotel to inquire what actually happened. On getting there, I saw a lot of thugs,” the former governor said on a ChannelsTV programme.

“They started molesting, cutting my boys, shooting. But the police were there too, and they did nothing and said nothing.

“They were macheting… my orderlies rushed me to a room and locked me up. Those boys had teargas, police also were throwing teargas. As they were advancing, the police were backing them up; and they were coming and were shooting,” the senator said.

He did not support Uzodinma of the APC ahead of the governorship election in Imo, preferring instead to back his son-in-law Uche Nwosu of the Action Alliance (AA) to succeed him.

Uzodinma would later win a court battle to unseat Emeka Ihedioha of the PDP and emerge governor of the southeastern state.