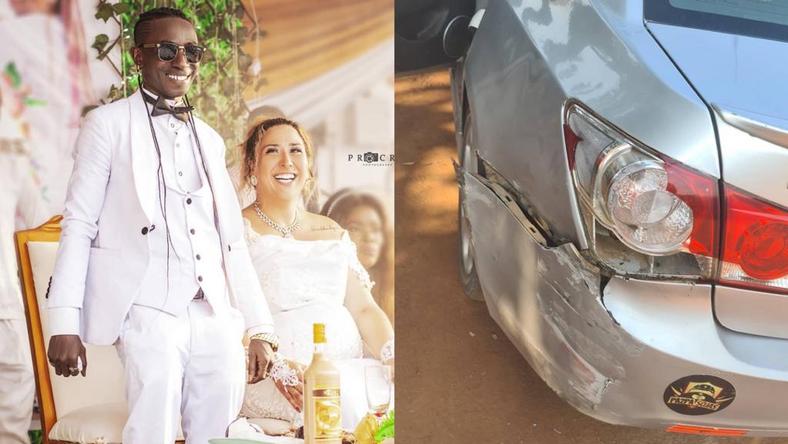 Both have escaped unhurt. The wife to Ghanaian musician broke the sad news on social media when she shared a video a wrecked car in which Patapaa could be heard furiously speaking about the situation.

She captioned the video “@patapaa_amisty & I had a car accident” and in another post of pictures of the damaged car, she wrote, “Thank You God. We Are Still Alive. It wasn’t our time yet, But I am still In shock“.

Details of how the accident occurred aren’t yet known but according to Liha’s location on on the Instagram post above, it happened in Agona Swedru, where they are based.

Patapaa and Liha got married on the 2nd of January 2020 at a ceremony which took over the internet. The marriage came off after the couple met in Europe a little over ago and later became lovers.

Speaking on Okay FM, she narrated that she first met Patapaa at a concert in Belgium where he came to perform his ‘One Corner’ monster hit track. According to her, though she lives in Germany, she liked the ‘One Corner’ song, hence, she decided to go for the show in Belgium.

“It all started when he had his show in Belgium. I have friends in Belgium and Germany who organized shows so there’s a friend in Belgium who invited Patapaa to come and perform and I really like the “One Corner” song, maybe you have seen it on my wedding day how I was dancing to it ” she said.