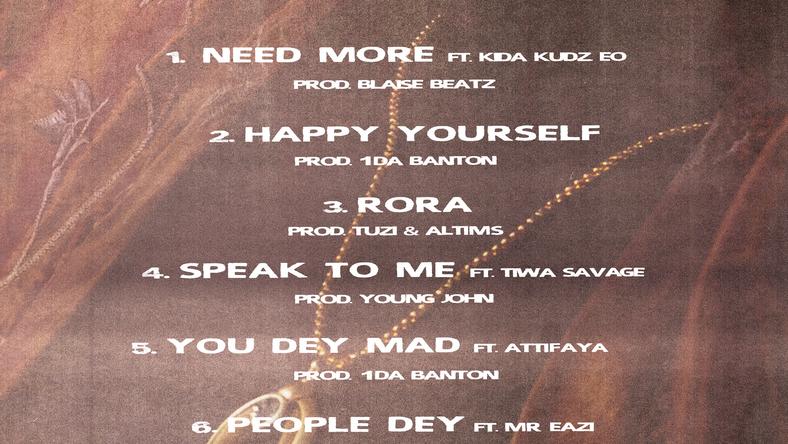 The EP contains his 2019 hit, ‘Rora,’ as well as great songs ‘Need More‘ and ‘You Dey Mad’ featuring Attifaya. The final single in that mention was released just a week ago and ‘Need More‘ is an underrated Afroswing record which featured Kida Kudz and EO. Banks is one of the prime talents that Nigerian music has seen in the last 10 years.

However, his exit from MAVIN Records coincided with a slow down in his pace. But regardless, Reekado’s talent has sustained his run with a hit like ‘Rora’ racking up numbers even before a video was released for the song. Since then, he has also released the amazing R&B record, ‘Options‘ with Parker Ighile.

Reekado Banks can make music and his talent is supreme, but there’s no reason why ‘Rora‘ should make this EP. The record is only on the EP to game the system when numbers are being celebrated in two weeks. The Ragga record, ‘Happy Yourself‘ is an incredible show of Banks’ range.

The music gleans the unsavoury situations around Nigeria to discuss the need to be happy and feel alright. Nonetheless, this song should not have been a track two. ‘Speak To Me‘ featuring Tiwa Savage sounds two or three years late. In fact, it shares striking similarities with Tiwa Savage’s smash hit, ‘All Over’ and Crayon‘s ‘Bamiloke.’

Nonetheless, Banks’ talent shines through in his discussion of love and so does Savage’s verse. It seems Banks was more focused on what Savage’s star power could potentially give his EP than actual good music.

‘People Dey’ is such a good record with echoes of Ghanaian Afro-pop music. The song tells a story of the different types of people in the world and their imperfections. However, instead of focusing on the bad energy, Banks wants to simply feel alright.

On the negative side, after the highs which start the song off, its hook could have used a more sonically dense hook. Mr. Eazi aces his verse though. ‘Mama’ is equally a great record which is geared to more parts of East Africa and South Africa. It even features Tanzanian act, Harmonize.

While this EP has some quality songs, the production on ‘Happy Yourself’ and ‘People Dey‘ seems incomplete. Nonetheless, praise more go to Reekado Banks for being aware enough to be strategic about his releases in 2020. However, strategy seems to supersede his music and that’s not good enough.

‘Options’ should also have made this EP.

Tracey Boakye Shares Behind The Scenes Video From Her 30rh Birthday Photoshoot, Says She Can’t Wait To Celebrate Three Decades On Earth

Tracey Boakye Shares Behind The Scenes Video From Her 30rh Birthday Photoshoot, Says She Can’t Wait To Celebrate Three Decades On Earth

Uganda: Bobi Wine raises alarm over presence of soldiers at his residence

COVID-19: My administration will move heaven, earth to get people vaccinated – Joe Biden