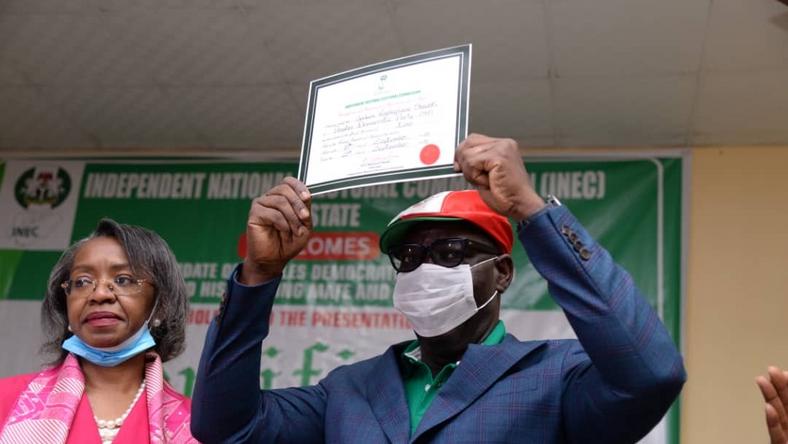 The trial judge, Justice Ahmed Mohammed, adjourned the matter on Monday for Obaseki to open his defence on January 5, after the APC closed its case after calling six witnesses.

The APC and one of its chieftains, Mr Williams Edobor, dragged Obaseki to court for allegedly forging his University of Ibadan degree certificate.

They said he submitted the certificate to the Independent National Electoral Commission (INEC) as part of his educational qualification to contest the September 19, 2020 governorship election in Edo.

Other defendants in the suit are the Peoples Democratic Party (PDP) and INEC.

The fifth and sixth witnesses, Mr Gabriel Iduseri and Mr Maikano Asekomhe, in their testimonies, claimed that Obaseki forged his University of Ibadan certificate because of alleged discrepancies in the Certified True Copies (CTC) they said they obtained from INEC.

Iduseri who claimed to be the current Caretaker Zonal Youth leader of the APC, however, admitted that he had never seen Obaseki’s original University of Ibadan degree certificate.

He also stated that his allegations were based on photocopies obtained from INEC.

Similarly, Asekomhe, who claimed to be an Associate Professor of Banking and Finance at the Benson Idahosa University, Benin, also said he had never seen Obaseki’s original certificate.

He said he could, therefore, not comment on the original certificate.

At the end of cross examination of the sixth witness, lead counsel to the APC, Mr Akin Olujimi (SAN), informed the court that his clients were through with their case and would want to close it.

Justice Mohammed subsequently ordered that the case of the plaintiffs be closed and ordered the first defendant, Obaseki, to open his case on the next adjourned date.

Meanwhile, Justice Mohammed, in a judgment delivered on Monday, struck out the case of the National Rescue Movement against the nomination of Mr Osagie Ize-Iyamu and AbdulGaniyu Daudu as governor and deputy governorship candidates respectively of the APC in the September 19, 2020 governorship election in Edo.

The judge struck out the case on the grounds that the case had become an academic exercise.

He said this was because the election had been conducted, winners emerged and Ize-Iyamu and Daudu were not challenging the outcome of the polls at the ongoing election petition tribunal in Edo.