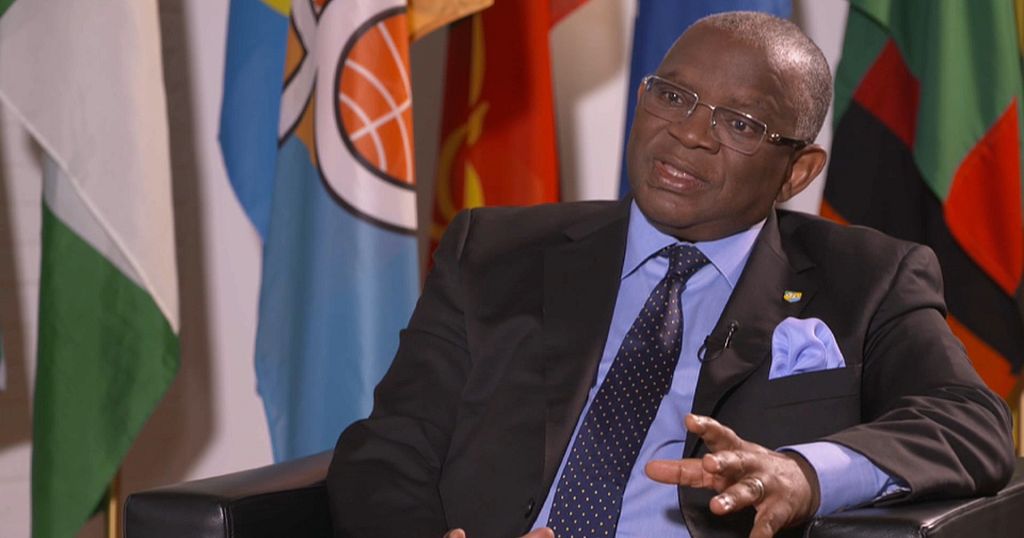 On April 15, chief negotiators from the Organisation of African, Caribbean and Pacific States (OACPS) and the European Union concluded negotiations leading to a new agreement between the two international organisations.

Angola’s Georges Chikoti has taken the lead of the organisation, and told Africanews he will continue the fight against poverty and for economic development.

Even though the Covid 19 pandemic may have slowed down any progress, Georges Chikoti is confident the 79 countries will bounce back, as “the pandemic itself will also imply better human behaviour”.

Africanews’s sister channel Euronews spoke to OACPS Secretary General Georges Chikoti about the challenges that stand in the way of this international organisation.

You can watch the full interview in the video player above.

Nara Madeira, Euronews: The Organisation of African, Caribbean and Pacific States represents 79 countries and over a billion people. A year ago, the group known as OACPS was transformed into an international organisation, with Angola’s Georges Chikoti as Secretary General, at a time when the world was facing new challenges.

But we will come to that in a moment. Mr. Secretary General, thank you for being with us. You started as an informal group and today you are an international organization. Why change the status?

Georges Chikoti, Secretary General of the OACPS : The demands of time and the pressure of underdevelopment meant that the summits – the eighth, the ninth summit – felt that the organization should become an international organisation after Cotonou and at the signing of the post-Cotonou. So the heads of state felt that developing countries had accumulated quite a lot of important experience in their relationship with Europe. It was this track record that the heads of state wanted to maintain and ensure that by becoming an international organization, we would maintain the relationship that we have had for several years with the European Union, but at the same time we would also become an international organization and we would maintain the relationship with other international partners, in a more multilateral perspective, but keeping at the core the essential objectives of the 79 countries that we represent, that is to say, the fight against poverty, the fight for economic and social development and also to ensure that environmental issues become more and more important on our agenda.

Nara Madeira: In April you signed a new partnership agreement with the European Union. What does it change and when will it be impl emented?

Georges Chikoti: So what changes now is that the agreement that involves the same countries has been divided into three regions. The regional dimension changes, bringing the realities of each region closer together in terms of cooperation. While some of the members of the OACPS, which are small islands where the challenges of the environment are increasingly critical, and therefore are a central issue, other countries face some political instability, for example on the African continent. Others are more interested in trade or industrial development issues. All these specificities were taken into account to ensure that, in addition to having a single agreement, we have three protocols that specifically address the reality of each region.

Nara Madeira: Your agenda for 2030 has ambitious goals. Poverty eradication, economic, social and environmental development. But could the pandemic jeopardize these goals?

Georges Chikoti: I don’t think it does, necessarily, call into question. I think, to some extent, it can also facilitate the rethinking. I think that when you look at the millennium goals, with the 2030 agenda, many of the times the countries have not managed to locate the issues of environmental impact very well. And, in our fight against poverty, we often did not take into account the environment in which we live and what is really the dimension of the concern that was placed in our programming. Now, with the 2030 agenda, it is noticeable that most countries are understanding that it is necessary to better coordinate in order to meet these goals. In fact, the pandemic itself will also imply better human behaviour, because until now we have probably all been a little irresponsible.

It could probably delay some things, but it could probably speed up others because we are becoming more and more aware that we have to create a healthy global environment before we can move on to other, possibly important, issues.

Nara Madeira: You have also stressed, and this will be my last question, that you are betting, as the rest of the world, on the fight against climate change through ClimaSA, with the support of the European Union. What is this program?

Georges Chikoti: This program essentially aims for countries to focus, more and more, on issues that have to do with major changes, namely typhoons that ra dically affect many of the islands that we represent, the issues of drought, floods that usually unexpectedly affect large communities, involve deaths, destruction of property and displacement of populations. All countries are more dedicated to environmental issues and they also have access to funding for all the initiatives they can create to develop prevention policies for the future.