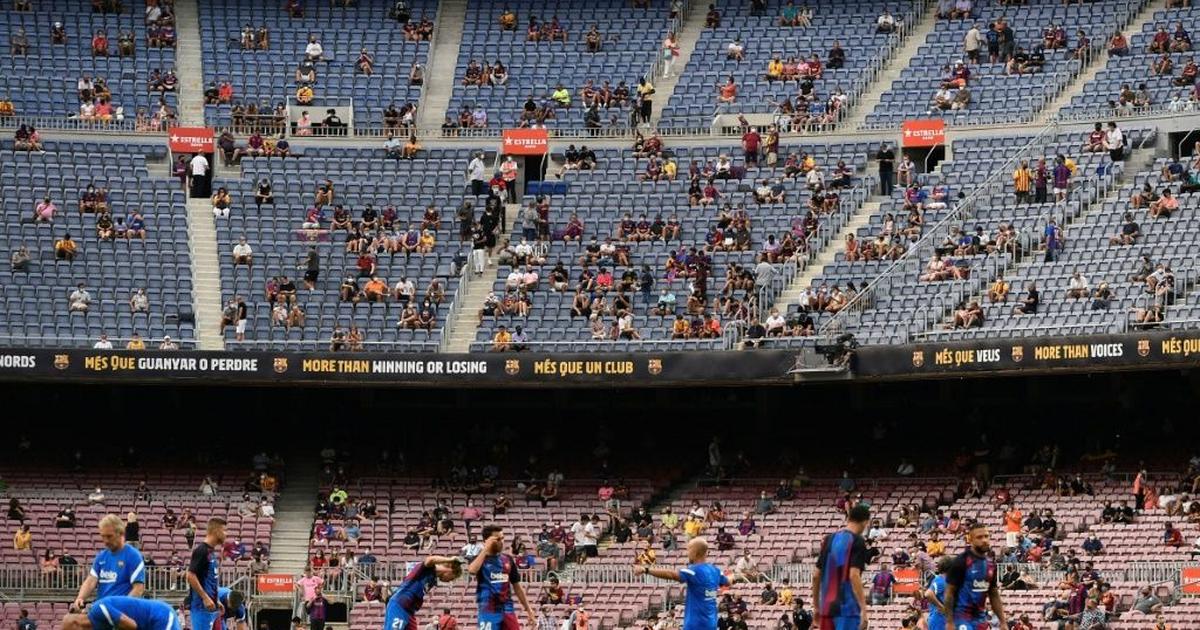 Captain Gerard Pique gave them a 19th minute lead with his 50th goal for the club.

Martin Braithwaite found the net in first half injury time and in the 59th minute. Sergi Roberto added a fourth in the last minute of the game.

Just over 20,000 fans were in attendance as crowds returned for the first time since the pandemic.

However, they had to hold their breath at one stage when Sociedad came back from 3-0 down to get to 3-2 thanks to goals from 20-year-old Julen Lobete in the 82nd minute and a 30-metre free-kick from skipper Mikel Oyarzabal three minutes later.

Messi’s memory lingered heavy over the Camp Nou on Sunday despite the removal of a giant photograph of the Argentine superstar from the entrance in the wake of his move to France.

Some banners were in place well before kick-off venting the fans anger towards president Joan Laporta.

One read “Laporta, Barca is not your business”, while another proclaimed “Barca yes, Laporta no!”

“I was in my room when I saw the news. I started sending messages to all my friends, and no one believed it. It was emotionally hard.”

The supporter added: “It’s a leap into the unknown (without Messi). We will see what happens.”

Inside the Camp Nou, fans made the most of their return after 18 months, chanting “Messi! Messi!”.

“The supporters are with us, they want to see football,” said Pique.

“We knew they were going to react that way. We all know what Leo represents, but everything changes and we have to keep going.

“We will be very competitive and we will fight for titles to the end. We will not have his talent, but we have proven that we can all play together.”

La Liga champions Atletico Madrid got their season underway with a 2-1 win at Celta Vigo.

Angel Correa gave Atletico the lead after 23 minutes after being set up by Thomas Lemar.

Correa added a second goal in the 64th minute just five minutes after Iago Aspas had pulled Celta level from the penalty spot.

However, the game was marred by a mass brawl in the closing stages following a foul on Atletico striker Luis Suarez.

Red cards were brandished for Hugo Mallo of Celta and Mario Hermoso of Atletico.

Vallecano played 75 minutes a man short after goalkeeper Luca Zidane, the son of French football legend Zinedine, was red-carded for bringing down Oussama Idrissi in the move which led to the penalty.

As Barca try to fill the Messi-sized gap, as well as ballooning debts of more than 1.2 billion euros ($1.6 billion), Real Madrid got off to a flier on the pitch as a brace from French veteran striker Karim Benzema helped bring a 4-1 victory at Alaves on Saturday.

The win, achieved with further goals from Nacho and Vinicius allowed Carlo Ancelotti to celebrate the start of his second spell in charge with a victory.

A Joselu penalty for the hosts was a minor blemish after Real keeper Thibaut Courtois, making his 100th Liga appearance for Real, brought down John Guidetti.

In other action on Saturday, Cadiz and Levante parted 1-1 as did Mallorca and Real Betis while the match between Osasuna and Espanyol ended in a goalless stalemate.

There are two matches on Monday as Villarreal go up against Granada while Elche meet Athletic Bilbao.

Valencia got the ball rolling Friday and pocketed three points after an early Carlos Soler penalty was enough to see them overcome Getafe 1-0.