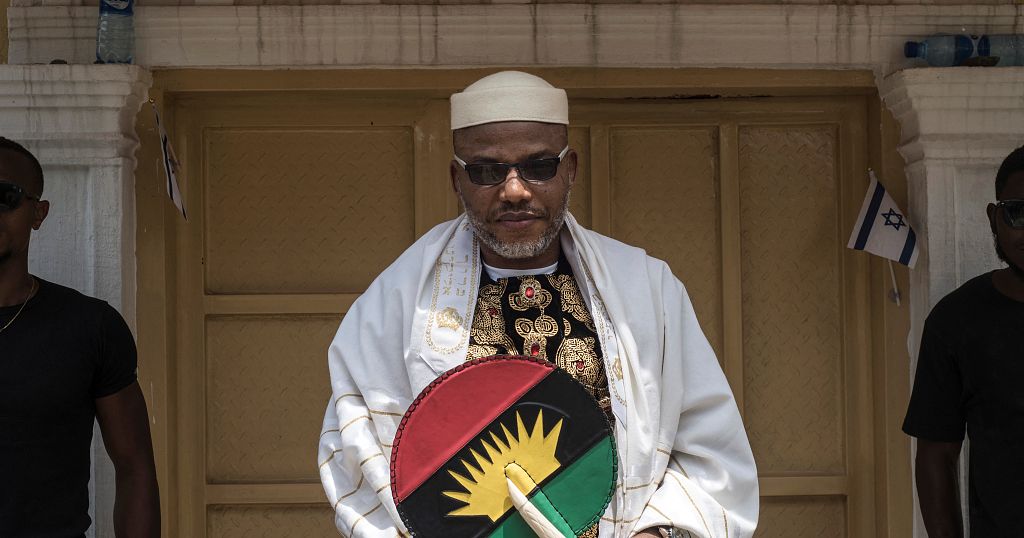 Nigeria has arrested the leader of the proscribed Indigenous People of Biafra, IPOB, Nnamdi Kanu.

Attorney-General and Minister of Justice of the west African nation Abubakar Malami(SAN), on Tuesday disclosured to journalists that Kanu was arrested and brought back to Nigeria on Sunday.

Kanu and his co-defendant are facing treasonable felony charges at the Federal High Court in Abuja, Nigeria’s capital. He also faces charges on unlawful possession of firearms and management of an unlawful society.

He had fled Nigeria in September 2017 after the military invaded his home in Afara-Ukwu, near Umuahia, Abia State, in the southeast of Nigeria.

Malami described the arrest as the result of a collaborative effort between security agencies in Nigeria and Interpol.

Extradited from the UK

Local news sources say Nnamdi Kanu was arrested in the UK, blindfolded and sneaked into the courtroom in handcuffs by operatives of Nigeria’s Department of State Services (DSS).

He was hurriedly taken to Court where the presiding judge told the prosecution lawyer, Shuaib Labaran to inform the defence counsel of the new date for the continuation of the trial.

The prosecution applied that Kanu jumped bail and wanted him to be remanded at DSS custody. The court granted the application and the judge adjourned the case to July 26, 2021.

Who is Nnamdi Kanu?

Nnamdi Okwu Kanu is a Nigerian Biafra political activist being the leader of the Indigenous People of Biafra. Kanu founded IPOB in 2014 and wants to create an independent state for the people of old Eastern Region of Nigeria through an independent referendum.

He began his activism for the freedom of Biafra as a Radio Biafra director and anchor of Biafra awareness under Ralph Uwazuruike, leader of the Movement for the Actualisation of Sovereign State of Biafra (MASSOB), who said while in a meeting in Kaduna, Nigeria on June 12, 2014, that he handed over Radio Biafra to Nnamdi Kanu, leader of IPOB but Kanu disappointed him.

Until 2009 when he started Radio Biafra, a station that called for an independent state for the Igbo people and broadcast to Nigeria from London, Kanu was a relatively obscure figure.

He would later run into trouble with the Nigerian government and was first arraigned over allegations of terrorism, money laundering, treason, others, on October 14, 2015. He was granted bail in 2017 but on March 28, 2019, his bail condition was revoked.

The earlier push for a separate republic of Biafra was championed by Emeka Ojukwu nearly 50 years ago.

The declaration of independence sparked a civil war which left more than a million people dead mostly Igbos from the South Eastern region of Nigeria aimed for the breakaway.

Nigeria’s President Muhammadu Buhari has said that the unity of the west African giant nation was non-negotiable.