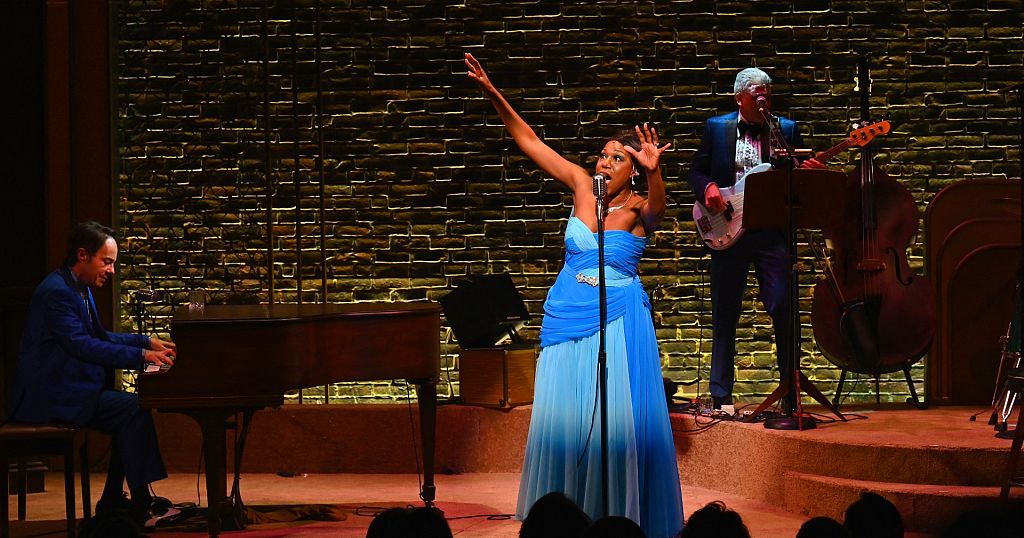 In New York, a pillar of the US music history is on the bill. The off-Broadway show “Little Girl Blue” immerses spectators in the life of Nina Simone.

Throughout the two-hour performance, artist and writer Laiona Michelle brings the queen of the blues back to life. If to get into the character before she hits the stage, Michelle undergoes a lengthy preparation. She doesn’t mind, telling the story of the civil rights activist was dear to her heart: “I decided that as an artist, it’s important that we, as Black people, own our stories and tell our narratives, because nobody can step into the shoes better than we can. So that’s, that’s the whole mission here. And I’m really proud of this piece.“

The show includes songs like “Feeling Good,” and “Love Me Or Leave Me” classics that contributed to the legend of Simone, who died in 2003.

Artist born Eunice Waymon in 1933 in North Carolina, was a gifted singer who aspired to become a classical pianist. However, she was denied admission to a prestigious conservatory in Philadelphia, a rejection she attributed to racism.

The show lays bare the suffering Simone endured throughout her life, including beatings from her husband and manager Andrew Stroud, and mental health struggles.

“When I was growing up, Nina Simone was buried in history, Michelle says. She was constantly told to sit down and shut up: ‘You’re being too loud. You’re the angry Black woman.’ So really, it was my mission to bring all that noise to the front and answer those questions. Why was she so unsettled? Why was she angry? You know, why was she so deeply sad?“

However, the writers couldn’t bring everything to the front because of a battle brewing over rights. They were for instance unable to perform the singer’s originals and had to leave out emblematic songs like “Mississippi Goddam”. Simone wrote the piece in response to a 1963 fire set by Ku Klux Klan members at an Alabama church, in which four young Black girls died.

The “Little Girl Blue” team had to rely on many of the covers that Simone rendered iconic since they weren’t allowed to perform her originals. The team blames the quandary on Simone’s former lawyer Steven Ames Brown. The producer of the show, Rashad V. Chambers, suspects financial motives led Brown into granting rights to Simone’s songs to someone else.

On the other hand, Attorney Brown accuses the team behind “Little Girl Blue” of having “appropriated Nina for their own gain,” saying they “have no understanding of her life.” He vowed a different show to be staged in New York and London, which “will be faithful to her life as she expressed it.“

The fact remains, following a successful 2019 run in New Jersey critics lauded the show. So the show must go.

“Nina Simone was a classically-trained artist, writer Laiona Michelle explains. She loved Bach; and really what she signed up to do was to be a classical pianist, to be the first Black classical pianist. But because of the climate of our country, she had to step up to the plate and fight for her people, you know, and sing protest songs. And so she was thrown into the jazz world heavily.“

Laiona Michelle aims to take the show to one of Broadway’s prestigious theatres, where biopics honouring Bob Dylan, Tina Turner and Michael Jackson have come out.