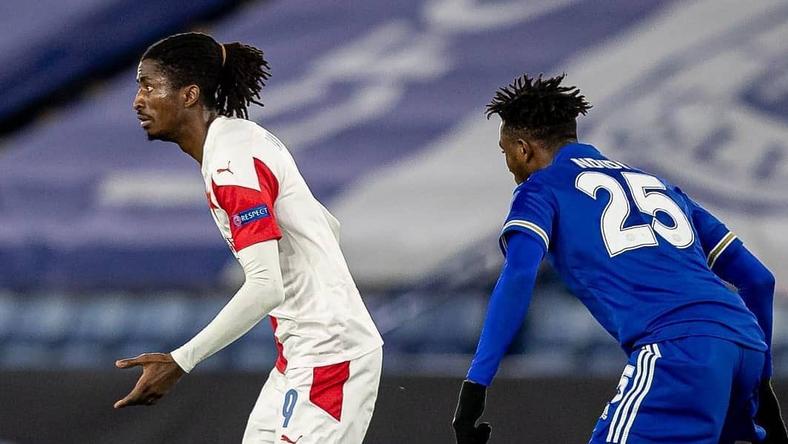 He was on for 90 minutes but didn’t have much chance in attack to get any individual highlight. He was hard working, though, tracking back often as Praha kept it tight to frustrate the Foxes.

His only highlight in front came in the 79th minute when he slipped a ball to Abdullah Sima, who doubled Praha’s lead. It might have counted as an assist, but the Nigerian didn’t do much for the goal leaving it all for Sima, who curled an effort past Kasper Schmeichel.

Praha’s shocking win came against Leicester City, who had Wilfred Ndidi all 90 minutes. Ndidi was his usual self in the game, breaking up plays in midfield and defending well during set-piece situations.

There was little he could do to prevent Praha’s two goals.

Olayinka and Ndidi were not the only Nigerian players on Europa League duties on Thursday.

Aribo and Balogun progress with Rangers

Joe Aribo and Leon Balogun were both in action for 90 minutes as Rangers progressed to the Round-of-16 following a 5-2 win against Antwerp on Thursday (9-5 aggregate win).

Aribo was impressive in the game. He kept it tidy and straightforward in midfield and also made some key passes in the final third.

Nothing special, but he was alright on the night.

Balogun continues to deputise at right-back but had a torrid time, especially against left-back Jordan Lukaku.

Lukaku skipped past a Balogun challenge before putting a ball across the box for Antwerp’s first goal.

The Belgian left-back also dribbled past Balogun one more time in the game.

In other games, three Nigerian players were second-half substitutes for their respective sides.

Samuel Chukwueze was a second-half substitute as Villarreal beat RB Salzburg 2-1 to progress to the next stage.

David Okereke was also introduced in the 84th minute as his side Club Brugge lost 1-0 at home to Dynamo Kyiv.

Iyayi Believe Atiemwen came on in the second half as Dinamo Zagreb beat Krasnodar 1-0 to win the tie 4-2 on aggregate.