In a lengthy post shared via her Instagram page on Thursday, November 4, 2021, the comedian explained the reason behind her visit to the nation’s number 2 man.

“Yesterday, I had the chance of meeting with the VP of the federation at the Presidential villa, Abuja. I urged for the “actual” lifting of the Twitter ban and as well, stressed on the issue of police brutality which hasn’t gotten any bit of change even after all the promises,” she wrote.

“I made the presidency understand how important Twitter is for the majority of us (the youths). The SMEs and the very plenty others who make a living via that platform. The Twitter ban has made so many small scale business crash and disrupted many.”

The IG comedian also revealed that she stressed the continuous police brutality experienced by young Nigerians.

“I also made it known to the VP that Police brutality hasn’t stopped and we the youths seem to be the target of that institution. #Endsars was not just to end SARS alone, it was to end all forms of police brutality and irresponsibility,” she added.

“I hope the assurances I got yesterday will take effect immediately. However guys, we must know that we the youth make 70% of the population and we have the future in our hands. The next step now is to GET YOUR PVC!!! #ENDSARS #ENDPOLICEBRUTALITY #LIFTTWITTERBAN ✊” 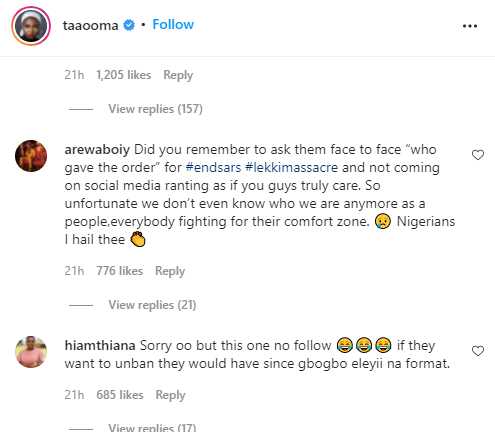 Taaooma’s long post didn’t sit well with many as she was called out by her followers for visiting the VP.

“omodaratitilopePosting Video evidence could have makes us believe all the good points you stated.”

“arewaboiy Did you remember to ask them face to face “who gave the order” for #endsars #lekkimassacre and not coming on social media ranting as if you guys truly care. So unfortunate we don’t even know who we are anymore as a people,everybody fighting for their comfort zone. 😢 Nigerians I hail thee 👏” 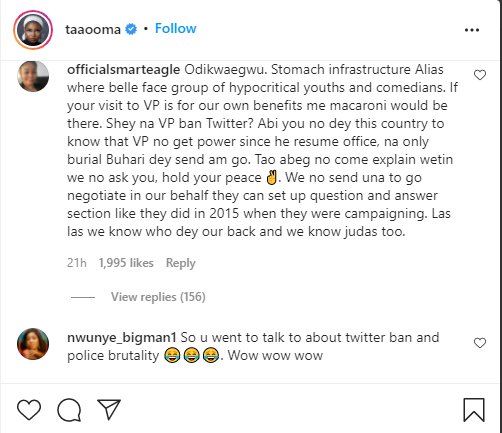 “hiamthiana Sorry oo but this one no follow 😂😂😂 if they want to unban they would have since gbogbo eleyii na format.”

It would be recalled that Taaooma and some Instagram skit makers paid a courtesy visit to the vice president, Yemi Osibanjo.