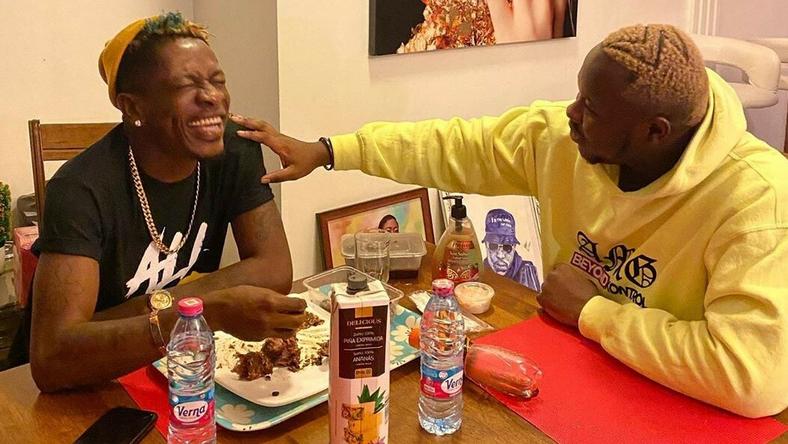 The former AMG Business label signee has been away from the country for a business trip in the States and on his return, he paid a surprise visit to the SM Empire record label owner.

He didn’t just pay him a surprise visit, he also surprised him with an enviable gift – a brand new iPhone 12. It’s unknown the type of the latest Apple product but it looks like the Pro.

Shatta Wale documented Medikal’s visit on his Snapchat profile over the weekend.

Fans went gaga over the gift Medikal gave him.

“This is soooo nice, this is all we need love says it all,” Instagram user ‘narhstephany’ said.

A few were critical. Medikal was criticised for abandoning a fan who got injured at his Sowutuom Concert.

A user ‘albert.koomson.18041’ wrote: “Tell amg to go and take care of the sick guy, and stop the nonsense.”

Another user ‘charleslondon33’ commented: “This no be necessary he for go fix the life of that boy ein show speaker fall for ein top way he dey eat bread 2cedis and water for the whole day then stop this kind yawa things, always giving to people who don’t need it in life this country apooo.”

User ‘jenny_rose__’ wrote: “Let him look after the guy who almost lost his life at the incident that happened in SOWUTUOM during his concert. That’s the most important thing..and it will be his blessings.”

Some asked other questions bothering them.

User ‘deemedia_services’ claimed: “Eeii this money’s deɛɛ no be music money oo boys are making it so many ways.”

“I da beg oh , which car is Ranger Rover ? A new brand from Brexit? Eeii Medikal, which car did you buy?” asked user ‘realjoshuainfo’.

Shatta Wale and Medikal’s relationship started not long ago but the two have created an enviable friendship and have grown together over the years.

They have done back-to-back collaborations, and even recently, when Shatta Wale was celebrating his birthday, Medikal recorded a new song, titled “Paah Paah Paah”, to eulogise him.