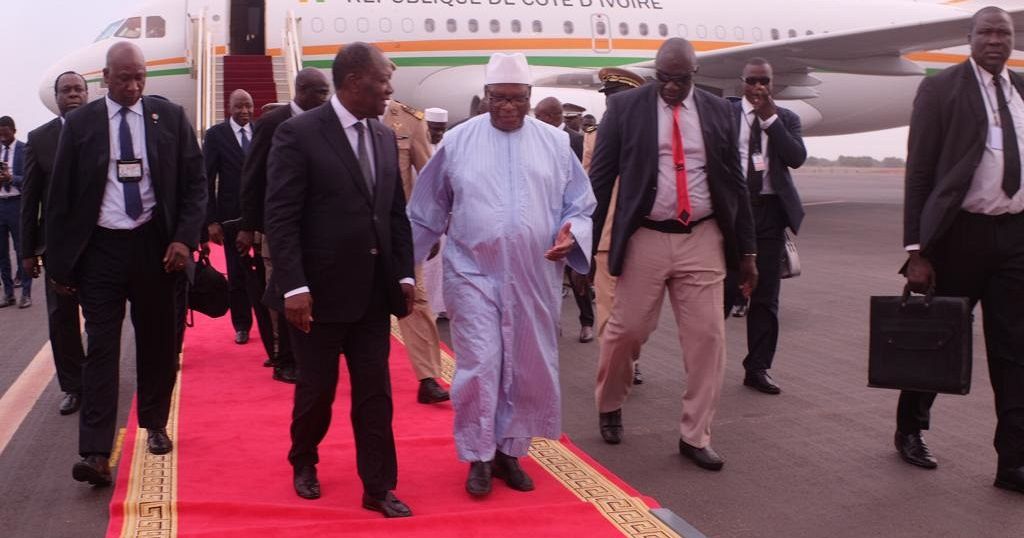 Nigerian president Muhammadu Buhari announced his first trip in months as the presidency confirmed he was joining four other presidents to salvage peace talks in Mali.

Regional mediators are stepping up efforts today in the West African country where the political opposition has renewed its call for protests so that President Ibrahim Boubcar Keita leaves office three years before his final term ends.

Opposition leaders had rejected an earlier solution proposed by mediators from the 15-nation West African regional bloc known as ECOWAS.

I would like once again to reassure our people of my willingness to continue the dialogue and reiterate my readiness to take all measures in my power to calm the situation.

The visiting leaders aside Buhari include:

An earlier ECOWAS mediation led by former Nigerian leader Goodluck Jonathan called for Keita to form a unity government and share power, but opposition leaders said the deal fell short because the president would get to remain in office.

ECOWAS said Keita’s departure is not something it can endorse. The president was democratically elected in 2013 and re-elected five years later.

His popularity has plummeted amid allegations of corruption and a relentless Islamic insurgency that began the year before he took office and has worsened under his watch. In June, demonstrators began taking to the streets by the thousands calling for his ouster, naming themselves the June 5 Movement.

Nearly two weeks ago, things took a dramatic turn for the worse when security forces attempted to put down the protests over several days. At least a dozen people were killed, and grief deepened the resolve of Keita’s opponents to seek his removal.

West Africa’s shuttle diplomacy has included several regional political heavyweights who helped intervene in 2012 when a military coup gave way to a jihadist takeover across Mali’s north. ECOWAS pressured the coup leader to hand over power to a transitional civilian government.

… to engage in further consultations towards finding a political solution to the crisis in the country.

Four presidents from the West African region are expected in Mali on Thursday (July 23) to help resolve the political crisis in the country.

They are expected to try the latest leg of mediation between counterpart Ibrahim Boubacar Keita and the main opposition protest movement – M5-RFP who are calling for Keita’s resignation.

The most recent regional intervention included the deployment of a former Nigerian president Goodluck Jonathan, who met all parties involved. The protesters, however, rejected the call for a unity government.

GEJ – as he is known back home – is expected to mediate between the embattled president Ibrahim Boubacar Keïta, opposition leaders, civil society actors as well as other major stakeholders as the crisis continues to deepen.

His appointment was announced by Jean-Claude Kassi Brou, chairperson of the ECOWAS commission. The bloc has last month dispatched a mission to meet with President Keita.

Protests by an opposition umbrella group got to a head late last week extending through the weekend as protesters reignited calls for the president to resign. Their demands are centered on mainly insecurity and disputed elections.

Recent protests led to the loss of four lives as police clashed with people in the streets. The state broadcaster was attacked as was the parliament – the latter was looted. The ruling party offices was also attacked.

The president has since reiterated his call for dialogue with the opposition and also took the move of dissolving the Constitutional Court – which action seems to have done little to appease the protesters.

Protesters ransacked a building belonging to President Ibrahim Boubacar Keita’s political party on Sunday, underscoring the tensions that remain in Mali, even after the president met one of their top demands.

The latest unrest at a neighborhood headquarters for Keita’s RPM party came as mourners returned from funerals to bury several of the victims who have died during political demonstrations in recent days, witnesses said.

Only hours earlier, the president had announced in a televised speech that he had dissolved the constitutional court as demanded by the opposition movement and was willing to consider re-doing contested legislative elections.

The movement’s leaders are no longer calling for the resignation of Keita, who has three years left in his final term. But Sunday’s unrest showed there are still elements deeply dissatisfied with his leadership.

Demonstrators seeking political reforms, some calling for President Ibrahim Boubacar Keïta’s resignation, occupied the national broadcaster in Bamako sending transmissions off air. Internet restrictions affecting most but not all users have continued to Monday afternoon and the incident is ongoing as of the latest update.

Social media platforms Twitter and Facebook and messaging apps WhatsApp and Messenger remained restricted with Mali’s leading cellular operator Orange 10:30 p.m. UTC / local time Friday as tensions peaked and continued as of Monday 13 January 2020, with issues also observed on Malitel and other networks over the weekend.

Affected users are able to regain access via VPN services which circumvent internet censorship by tunnelling to other countries. Listed platforms remain blocked or degraded as of Monday while other online services and websites continue to function normally on restricted networks.

Weekend of tensions and concessions

Eleven people were killed in the violent demonstrations held Friday and Saturday, officials said. The police crackdown now threatens to further escalate the crisis, with one political party already criticizing the government for deploying anti-terrorism forces to the streets during the demonstrations.

Dissolving Mali’s constitutional court had been a top demand for the protesters because the body had released official results from legislative elections this spring that now are being disputed by several dozen candidates. Keita also told Malians he was willing to consider re-doing the legislative elections in those areas, saying such concessions are needed to save Mali from further violence.

“We must go beyond ourselves and only consider Mali,” the president said in his televised address late Saturday.

The president, who was elected in 2013 and won a second term five years later, had promised last week to dissolve the court. Demonstrators, though, have said they also want the National Assembly dissolved, a move Keita has yet to endorse.

Malian President Ibrahim Boubacar Keita went on national television early Saturday, urging dialogue with his opponents just hours after thousands of anti-government protesters marched through the capital with some pushing their way into state television offices.

Friday’s developments marked a major escalation in the growing movement against Mali’s president, who still has two years left in office in this West African country long destabilized by Islamic extremists.

Earlier in the day, anti-government protesters had barricaded roads and burned tires in the capital, Bamako.

Keita’s overnight address to the nation took a conciliatory gesture days after he had tried to appease the protesters by promising to revamp the constitutional court whose legislative election results back in April have been disputed by several dozen candidates.

“I would like once again to reassure our people of my willingness to continue the dialogue and reiterate my readiness to take all measures in my power to calm the situation,” he said in closing.

The movement against Keita’s government is now known as the June 5 Movement, or M5, a reflection of when demonstrators first took to the streets en masse. Keita’s gestures in recent days so far have failed to win favor with the opposition group, which still wants the National Assembly dissolved.

While the group has officially backed down from its calls that Keita leave office, some protesters still want him gone.

Keita came to power in the aftermath of a French-led military operation to oust Islamic extremists from power in northern Mali’s towns in 2013, winning the first democratic elections organized after a military coup the year before.

Despite the presence of U.N. peacekeepers, and French and regional forces backing Malian troops, the extremist groups have continued to mount attacks.

Last year was particularly deadly for the army as hundreds of soldiers were killed in the north, forcing the military at one point to even close down some of its most remote and vulnerable outposts. Those losses prompted criticism of how the government was handling the crisis in the north.

Tensions mounted in late April after legislative elections were held, and several dozen candidates disputed the official results issued by Mali’s constitutional court. A mission from the regional bloc known as ECOWAS has suggested that the government re-hold elections in the localities where results are contested.

The last democratically elected leader before Keita, President Amadou Toumani Toure, was overthrown in the 2012 military coup after a decade in power.

The political chaos that ensued has been blamed for creating a power vacuum that allowed the Islamic insurgency to take hold in the northern towns. Following international pressure, that coup leader later handed over power to a civilian transitional government that organized elections.