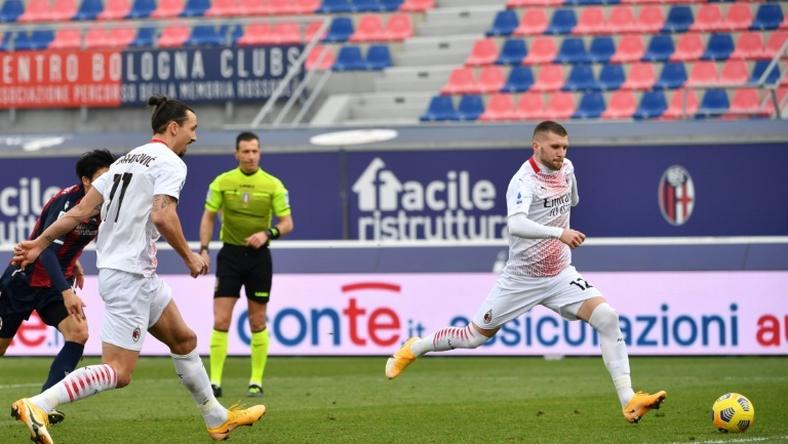 A Riccardo Improta own goal put the hosts ahead early on against 11th-placed Benevento at the San Siro.

Champions Juventus moved into third, seven points off top spot with a game in hand, after a 2-0 win over Sampdoria.

Milan bounced back after losses to Atalanta in the league and to Inter in the Italian Cup on Tuesday, a game in which Zlatan Ibrahimovic was sent off.

“It was a strong response from the team. A victory that gives us confidence at the end of a difficult week,” said Milan coach Stefano Pioli.

The midweek Milan derby was overshadowed by a clash between Ibrahimovic and former Manchester United teammate Lukaku.

Ibrahimovic on Saturday drew a blank for a second straight league game for the first time this season.

Bologna goalkeeper Lukasz Skorupski made a brilliant double save from the Swede early on.

The visitors were awarded a penalty when Mitchell Dijks brought down Rafael Leao, with Ibrahimovic stepping up to take it.

But the 39-year-old’s poor record from the spot continued with his fourth penalty miss in all competitions this season.

Luckily, Ante Rebic was on hand to slide in the rebound after Skorupski’s save.

The Ivorian made no mistake, planting the ball into the middle of the net.

“The penalty taker is Ibra, it’s up to him, when he doesn’t feel like taking it, I kick,” said Kessie.

Substitute Andrea Poli pulled a goal back for 13th-placed Bologna against his former club with nine minutes to go.

In Milan, Inter’s Christian Eriksen, who scored a late winner in the Cup derby, set up the first goal in the seventh minute when his free-kick was turned into his own net by Improta.

Martinez ended his six-match goal drought on 57 minutes with a left-footed strike into the bottom corner.

Achraf Hakimi had a goal ruled out for offside, but seconds later Benevento goalkeeper Lorenzo Montipo’s dreadful pass was intercepted by Martinez, who set up Lukaku to score.

Substitute Alexis Sanchez served up the fourth for Lukaku with 12 minutes to go, bringing the striker’s tally to 14 league goals this season, one fewer than Serie A leading scorer Ronaldo.

In Genoa, Ronaldo failed to score for the third consecutive league game, but Juventus continued their climb up the table.

The Portuguese striker has been criticised for breaking coronavirus rules with a visit to a mountain resort for his girlfriend’s birthday.

“Ronaldo always does his bit for the team and it’s not a problem if he doesn’t score,” said Juventus coach Andrea Pirlo.

Federico Chiesa opened the scoring on 20 minutes after a move involving all three Juventus forwards.

Alvaro Morata played a one-two with Ronaldo, before the Spaniard’s low cross was slotted in by Chiesa.

Claudio Ranieri’s Sampdoria came close to an equaliser, with Juventus goalkeeper Wojciech Szczesny denying Fabio Quagliarella a goal against his former club on the eve of his 38th birthday.

Morata had a goal ruled out for offside on 56 minutes for Juve, who had to wait until injury time to score a second.

Ronaldo’s cross-field pass found the run of Juan Cuadrado who laid it on a plate for Ramsey to tap in his second league goal of the season.

“The attitude is right, we finish a positive January in which we have grown a lot, even if we could have killed off the game sooner,” said Juventus centre-back Giorgio Chiellini.

Juventus sit two points ahead of fourth-placed Roma, who host Hellas Verona on Sunday, with the two teams set to meet next weekend in Turin.