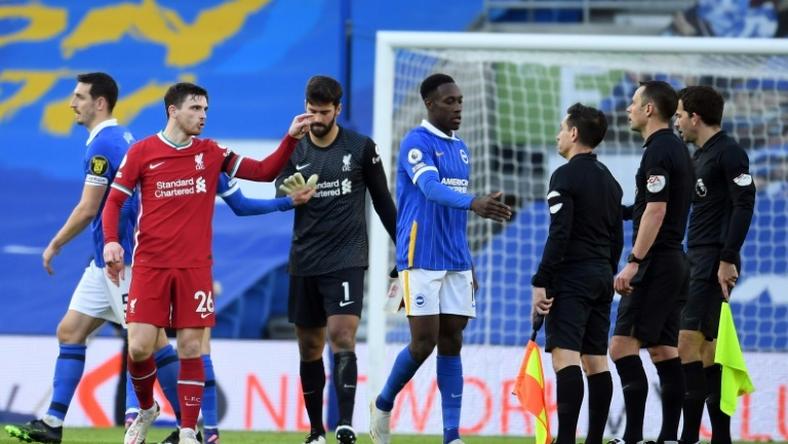 Jurgen Klopp’s side took the lead through Diogo Jota’s second half strike after Brighton’s Neal Maupay had missed a penalty in the first half.

But Liverpool were stunned in stoppage-time when Andrew Robertson’s challenge on Danny Welbeck was ruled a penalty after Stuart Attwell overturned his initial decision.

Gross converted from the spot, leaving Klopp sarcastically applauding the officials at the end of a disappointing week for Liverpool after their shock Champions League defeat at home to Atalanta.

Liverpool went back to the top of the table as a result of their draw, but the champions are just one point ahead of previous leaders Tottenham.

Tottenham would regain pole position if they avoid defeat at Chelsea on Sunday, while the Blues will go top if they win the London derby.

It was one of those days for Liverpool, who also saw goals correctly disallowed by VAR for offside against Mohamed Salah and Sadio Mane.

There was more bad news for injury-ravaged Liverpool as James Milner was forced off in the second half.

Klopp had claimed it was almost a “crime” that Liverpool had to feature in the early Saturday match after playing in the Champions League just three days earlier.

He made six changes from the Atalanta game as Jota, Fabinho, Roberto Firmino, Andrew Robertson, Takumi Minamino and Nathaniel Phillips came into the starting line-up.

Liverpool should have taken the lead in the opening moments when Fabinho unfurled a perfectly-weighted long pass that picked out Salah’s run, but the Egyptian fired wastefully wide from just inside the Brighton area.

But with just Liverpool ‘keeper Alisson Becker to beat, Connolly lost his nerve and timidly guided his shot well wide.

Connolly’s runs were causing Liverpool problems and when the Brighton forward made another well-timed incursion in the 20th minute, he was tripped in the penalty area by the panicked Neco Williams after he was caught out of position.

Maupay stepped up to take the spot-kick, but his side-foot effort went wide despite Alisson diving the wrong way.

It was a lucky escape for Liverpool and Maupay’s misery was compounded when he limped off injured moments later.

Liverpool thought they had hit back with a sucker punch when Salah sprinted onto Firmino’s pass and scuffed his shot past Brighton keeper Mat Ryan.

But VAR curtailed Salah’s celebrations as he was ruled offside by the tightest of margins.

After a spluttering first half, Klopp’s men finally found some rhythm following Jordan Henderson’s introduction at the break.

In a warning that Brighton failed to heed, Jota turned to flash a shot narrowly wide and in the 60th minute the Portugal forward put Liverpool.

Robertson found Salah and his pass teed up Jota on the edge of the Brighton area.

Jota has enjoyed a superb start to life with the Premier League champions, scoring nine times in 14 games since signing from Wolves in September.

Salah was substituted just after the goal, but he didn’t seem happy with Klopp’s move, gesticulating with his hands and ignoring the German when he walked past him to the bench.

Liverpool were seconds away from three points when Robertson went to clear in his own area as Welbeck closed in.

Robertson’s foot made contact with Welbeck, but there were few appeals from Brighton before Attwell awarded a contentious penalty after consulting the pitchside monitor.

With Maupay off the pitch, Gross took this one and fired down the middle to salvage an unexpected point.