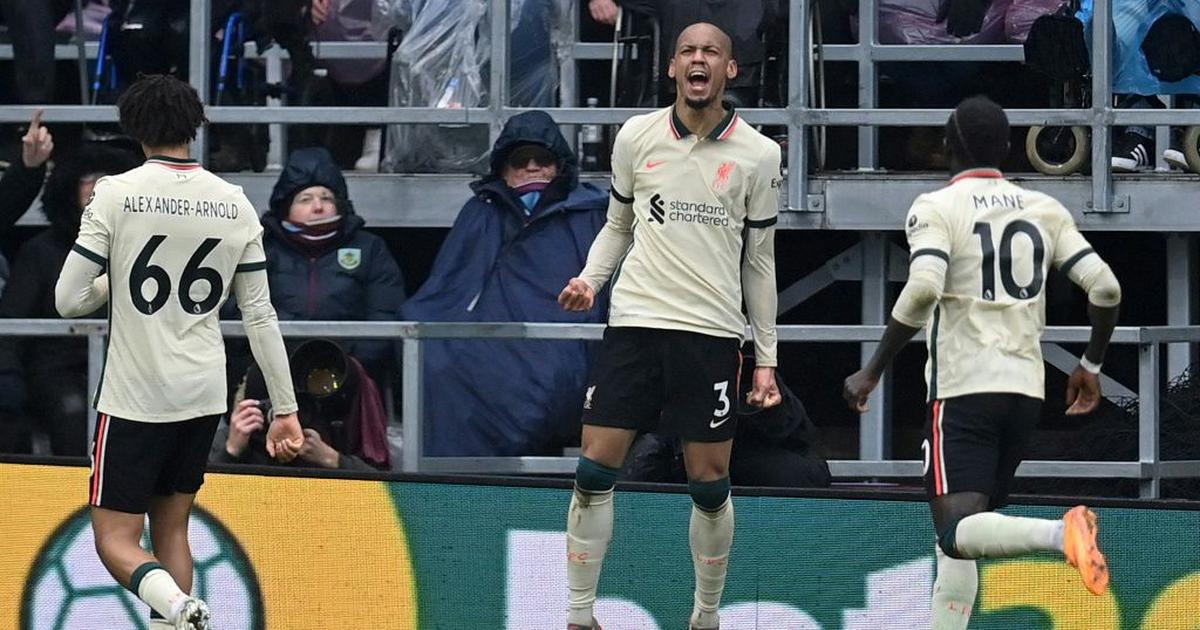 Fabinho struck late in the first half at windswept Turf Moor to give Liverpool their fourth successive league victory.

Liverpool are nine points behind City with one game in hand as the Reds refuse to let the title race become a prolonged coronation for Pep Guardiola’s men.

City made it 14 wins from their last 15 league games on Saturday as Raheem Sterling’s hat-trick inspired a 4-0 win at lowly Norwich.

But Guardiola is convinced Liverpool will push the champions all the way to the finish line and the way they ground out a hard-fought success against bottom of the table Burnley suggests he is right not to count them out.

Reds boss Jurgen Klopp was able to welcome back Sadio Mane for his first appearance since helping Senegal win the African Cup of Nations.

Mane, who only returned to training on Friday, was joined in Liverpool’s attack by Mohamed Salah, the Egyptian making his first start since being on the losing side against Senegal in the final.

It was the first time since the end of October that Salah, Mane and Roberto Firmino had started together.

On a wet afternoon in Lancashire, Burnley were in typically aggressive mood, with Alisson Becker forced to save Josh Brownhill’s swirling strike.

Burnley’s Wout Weghorst should have done better than produce a tame chip when he burst clean through on goal.

After a shaky start, Fabinho restored order for Liverpool five minutes before half-time.

The Brazilian poked home a fifth goal in his last seven games after Mane headed on Trent Alexander-Arnold’s corner.

Antonio Conte’s side, loudly booed off at full-time, dropped to eighth place, four points adrift of the Champions League places.

If that was an ugly goal to concede, there was worse to come for Tottenham as they imploded in the 18th minute.

Lloris was involved again with a woeful pass to Ben Davies, prompting the startled defender to gift possession to Wolves.

Daniel Podence’s shot was deflected onto the post by Davinson Sanchez and Dendoncker bundled in from close-range.

Wolves, who climbed one point above Tottenham into seventh, have won four successive top-flight away games for the first time since 1980.

The Magpies, winners of three consecutive league matches for the first time since 2018, are four points above the relegation zone.

Eddie Howe’s side were given a penalty when Calum Chambers brought down Joe Willock, but referee Craig Pawson changed his decision after VAR showed the foul took place just outside the area.

It was only a temporary reprieve for Villa as Trippier smashed the resulting free-kick past Emiliano Martinez in the 35th minute for his second set-piece goal in successive games.

Villa were denied a 61st minute equaliser by the slenderest of offside decisions as VAR chalked off Ollie Watkins’ far post header.

In Sunday’s late game, West Ham head to Leicester with their top four bid overshadowed by the controversy over Kurt Zouma’s abuse of his pet cat.