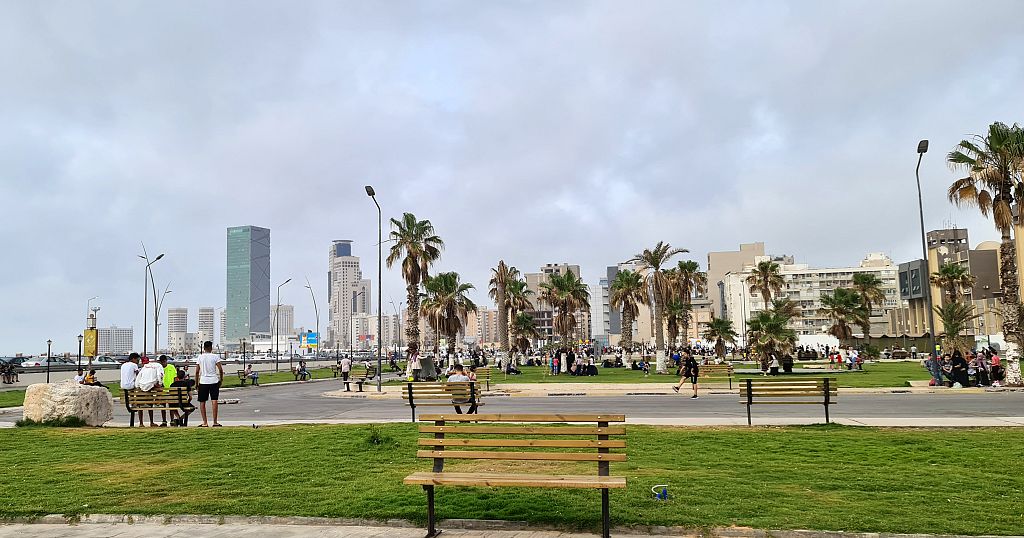 A decade ago, many Libyans could never have imagined themselves enjoying leisurely family picnics at the military academy of the Amazons — the entourage of female bodyguards of pan African leader Muammar Muhammad Abu Minyar al-Gaddafi leader who was assassinated in the 2011 NATO-backed uprising.

The once fear-provoking site was a scene of conflict warred over by a succession of armed groups who sought to take control of the strategic site — located between the port and city centre.

But four years ago, Tripoli authorities decided to turn the facility into an outdoor public recreation zone.

They demolished the buildings, training areas and high walls surrounding the barracks — leaving only a control tower at what was formerly the academy’s main gate.

In their place, they set up five-a-side football fields, running and cycling tracks, picnic tables, a play area for children and grassy sections — a first step towards demilitarising the heart of the capital.

The area, located beside the seaside road, opened to the public a few weeks ago.

Iskandar al-Sokni, an artist who decorated a large section of the recreational area, explains his artistic vision, “We tried to create joy through the art and colours and people liked it.”

In the same vein, other former military sites are also being turned into gardens, parks and bathing areas that should soon be accessible to the public.

Mohamed Omar, a resident of Tripoli, is very happy with the evolution of events.

“It is an excellent idea to have this place in the city centre, as it wasn’t right to have a zone here, but having this park is much better, so may God bless whoever came up with this great idea.”

Libya’s security situation has gradually improved since the two rival factions signed a truce last year that subsequently saw the set up of a new interim government towards general elections in December.

“Our aim was to limit the spread of weapons and shut down all military camps inside cities,” he told AFP.

“This is a great step, as our aim was to limit the spread of weapons and shut down all military camps inside the cities, and we succeeded. It was thanks to the people’s awareness, the government’s understanding and the will and perseverance of Tripoli’s municipality to meet the demand of its residents.”

All concrete and forward’-moving steps — after a decade of conflict, towards the reunification in peace of the African nation.

From military academy now transformed into a family relaxation area. Tripoli’s recreation zone has been a hit since its opening.

“Libyans need these kinds of spaces to release the pressure of daily life,” Mayor Khlifi added.

Families picnic at wooden tables and benches while children enjoy the playground or get ice creams from a van.

Tripoli resident Muhannad Kashar said he and his family come every evening.

“I like doing exercise, and here, I can go for a walk with my wife while our children play nearby,” the 47-year-old said.

“We can breathe the fresh sea air, and with all these families, it feels like Tripoli is alive again,” said his wife in her late thirties, who did not give her name.

Unlike many other places in the city that are littered with trash and debris, the recreation area has so far remained clean and tidy, with plenty of bins available and visitors taking care not to leave garbage behind.

Girls and young women who would usually avoid exercising on the streets for fear of being harassed — or because the pavements are in such poor condition — can do so without needing to be chaperoned.

Cyclists like Mahmud al-Tijani too can enjoy the rare pleasure of using a dedicated bike track.

Tijani said he had ridden from the city of Zawiya, around 45 kilometres (30 miles) west of Tripoli, just for the novelty.

“It’s also a chance to meet other cyclists from different cities,” he said.

Artist Iskandar al-Sokni, who decorated a large paved section of the area, said it took him three months to complete the design.

The idea was to “create joy through colours… and a message of hope for all Libyans,” he said of the work, painted over an area of 2,500 square metres.

It aims to “convey a message of peace,” he said.

Nigeria receives four million Covid vaccine doses from the US

Nigeria receives four million Covid vaccine doses from the US