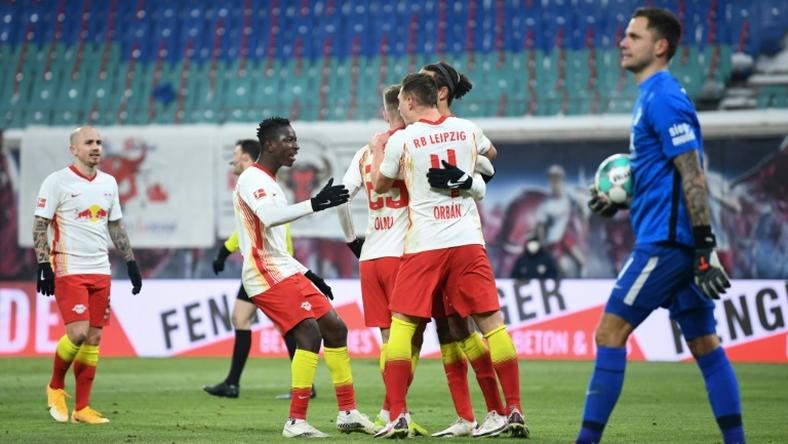 In sub-zero temperatures, Leipzig warmed up for Tuesday’s last 16, first leg clash against Liverpool with goals by Dani Olmo and Christopher Nkunku giving them a 2-0 lead at half-time.

After Nordi Mukiele was fouled in the area, Olmo had his first penalty attempt saved by Augsburg goalkeeper Rafal Gikiewicz.

However, VAR ordered the spot-kick retaken after Gikiewicz was judged to have stepped off his line and Olmo made no mistake with his second attempt.

Nkunku doubled the lead soon after when Yussuf Poulsen presented him with a simple tap-in just before half-time.

Augsburg pulled a goal back when midfielder Daniel Caligiuri converted a penalty 13 minutes from the end.

Nkunku could have added a second goal when he hit the post late on.

The victory was overshadowed by reports France defender Upamecano, who was on the Leipzig bench against Augsburg, will join Bayern next season.

Leipzig sports director Markus Kroesche insisted Upamecano was rested ahead of Tuesday’s first leg against Liverpool which was switched to Budapest due to Germany’s Covid-19 travel restrictions from the UK.

Second-placed Leipzig cut Bayern Munich’s lead at the top of the Bundesliga table to four points.

Bayern host Arminia Bielefeld on Monday having beaten Mexican side Tigres on Thursday in the Club World Cup final in Qatar.