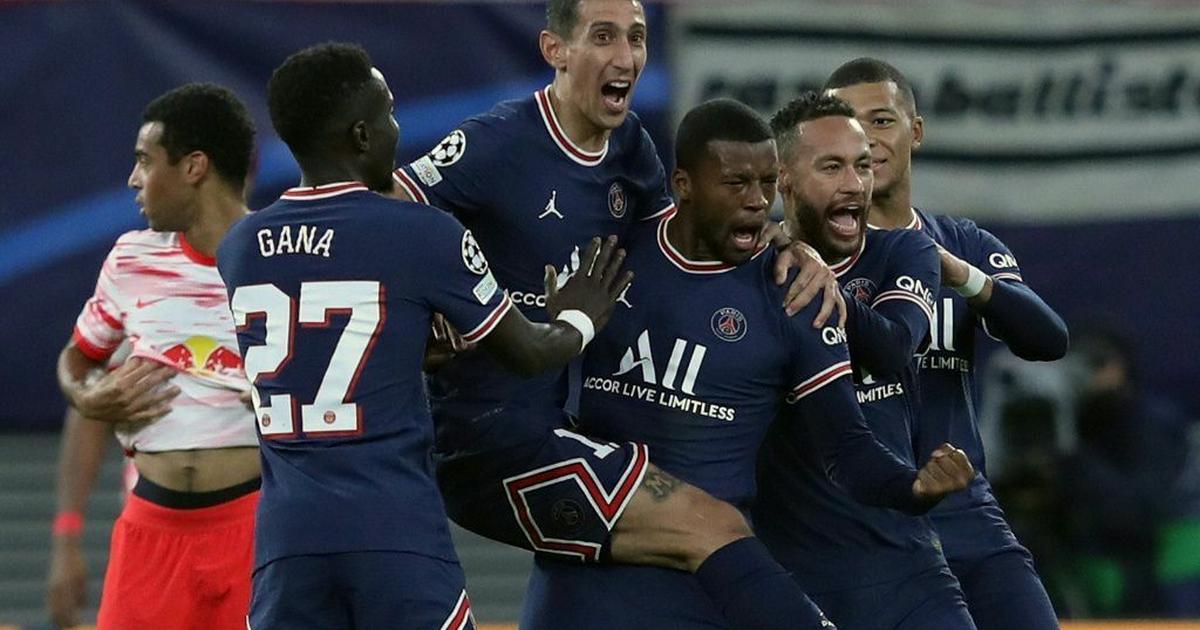 PSG had been cruising to an away win and were 2-1 up with 90 minutes gone as Georginio Wijnaldum netted twice to cancel out Christopher Nkunku’s early goal for the hosts.

In the dying seconds, Leipzig were awarded a penalty when PSG defender Presnel Kimpembe leaped onto Nkunku as a cross came in and substitute Szoboszlai made no mistake with the spot kick.

With Messi out injured, the draw cost PSG first place in Group A and left them a point behind new leaders Manchester City, who thrashed Club Brugge 4-1.

Leipzig’s faint hopes of reaching the last 16 were ended as they remain bottom of their group despite earning their first point in Europe after three previous defeats.

The German club put up a fight in the 3-2 defeat at PSG a fortnight ago and made a lightning start on Wednesday.

With barely 20 seconds gone, PSG captain Marquinhos had to clear off the line as Andre Silva got in behind the defence and forced Gianluigi Donnarumma into a save.

The hosts kept up the pressure and deservedly took the lead when Silva’s cross was met with a superb diving header by Nkunku to claim his fifth Champions League goal in four games.

The 23-year-old was born in the Paris suburbs and joined Leipzig from PSG in 2019.

Leipzig attacked again and when Silva was brought down in the area by Danilo Pereira, the referee pointed to the penalty spot.

However the weak attempt by Silva, who has struggled for form in Leipzig since his summer transfer from Eintracht Frankfurt, was easily saved by Donnarumma with barely 11 minutes played.

Angel Di Maria started the break for PSG’s equaliser, Neymar carried on the move and Mbappe supplied the cross which former Liverpool man Wijnaldum flicked into the net on 21 minutes.

Tempers became heated and with half an hour gone, Leipzig coach Jesse Marsch was booked for arguing with the referee.

Wijnaldum doubled his tally when he nodded Marquinhos’ header over the line and the VAR allowed the goal, despite suspicions of offside, to make it 2-1 at the break.

Mbappe should have put the game beyond Leipzig’s reach when he fired over, then shot straight at Leipzig goalkeeper Peter Gulacsi to waste two clear chances early in the second half.

The visitors were guilty of taking their foot off the gas as Leipzig created the better chances.

Donnarumma just got a glove to a cross, which was heading for Leipzig striker Yussuf Poulsen, then Szoboszlai fired wide for the hosts as PSG lived dangerously.

The game came to a dramatic close when Kimpembe jumped into Nkunku and Szoboszlai calmly slotted home the penalty.