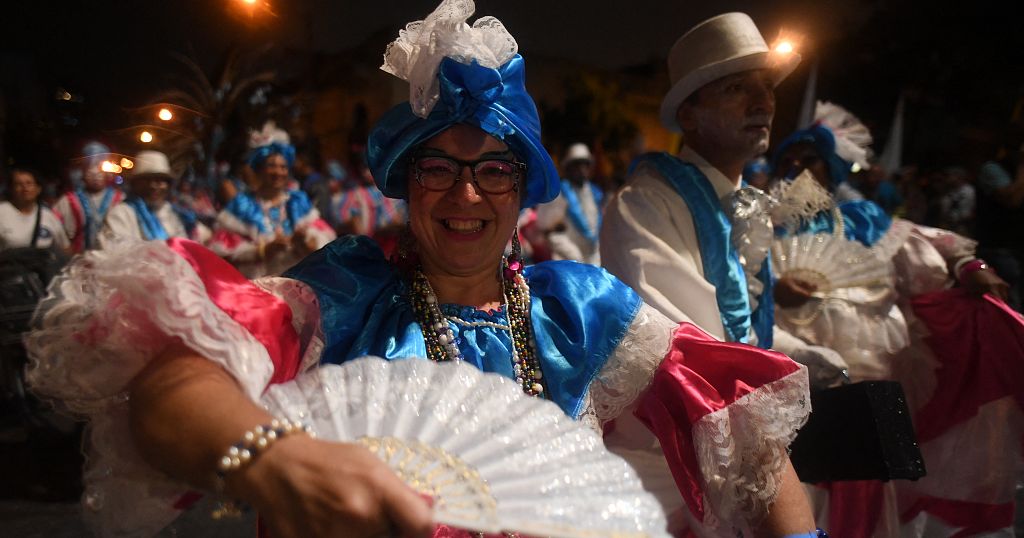 As a little boy, Cesar Pintos — now 86 — played “drums” with his friends in the streets of Montevideo’s black-majority neighborhoods, beating tin cans with twigs to ancestral rhythms brought to Uruguay by enslaved Africans.

It was the 1940s, barely 100 years since the abolition of slavery in the South American country and a period of explosive growth for candombe — a uniquely AfroUruguayan music style.

“Black people brought it here,” Pintos told AFP of the music, which UNESCO recognized as a piece of Uruguayan cultural heritage “transmitted within families of African descent.”

“They brought it in their heads, because they had nothing” in the line of possessions, said Pintos.

As an adult, he started his own “comparsa” of drummers and dancers from his Cordon neighborhood, one of the birthplaces of candombe.

The group, named Sarabanda, participates to this day in “Las Llamadas” — an annual parade hailed as a celebration of African heritage and the highlight of Montevideo’s carnival.

Las Llamadas translates as “The Calls,” from the ancient practice of beating drums to “call” the community together.

Every year since 1956, dozens of comparsas march in the Montevidean city center with painted faces and elaborate costumes that hark back to a distant past on a foreign continent.

In a two-day carnival competition watched by thousands, they beat out candombe tunes on wood and animal skin drums as the performers dance.

– From ‘objects’ to musical stars –

Today, Las Llamadas is a celebration for all race groups — in fact many comparsas are majority white.

But the origins of candombe music are found in black struggle.

Montevideo was an important entry port for enslaved Africans brought by Europeans to South America from the second half of the 18th century.

By the end of the 1700s, over a third of the capital’s population were African descendents, according to the municipal website.

For generations of enslaved people and their offspring, drumming and dancing in their free time was a way to hold on to distant ties to the mother continent.

When slavery was abolished in Uruguay in the mid 19th century, AfroUruguayans created mutual aid societies, whose lively meetings gave birth to candombe.

“The drum for us is fundamental… It allows us to protest when we need to make ourselves heard, and also to have fun,” Alfonso Pintos, the 59-year-old son of Cesar, told AFP.

He pointed to the role of comparsas in drumming up Uruguayan resistance to apartheid in South Africa, and closer to home, the country’s own military dictatorship of the 1970s and 1980s that displaced many black Montevideans.

Today, Las Llamadas is more party than protest, but the fight for equality is not over.

According to the World Bank, Uruguay stands out in Latin America for its low level of inequality, though black people are more likely to be poor.

The last inequality report by the government’s INE statistics institute reported in 2014 that more than half of Afrodescencents did not have their basic needs met, compared to less than a third of whites.

Nine in ten AfroUruguayans aged 20 to 24 do not obtain a tertiary education.

Just over 255,000 people out of about 3.2 million Uruguayans identified as Afrodescendents in the last census.

It is a shrinking ratio of the population — about 8.0 percent compared to more than a third 200 years ago.

For many AfroUruguayans, candombe is a cherished inheritance.

Alfonso Pintos, a woodworker by trade, has taken over Sarabanda from dad Cesar, who still makes guest appearances with the troupe.

Cesar’s grandson Pablo, 34, is the drumming coordinator and granddaughter Micaela, 29, the lead dancer.

But some feel candombe is no longer true to its roots.

Tomas Chirimini is president of the Africania civic association and leader of the performing troupe Conjunto Bantu, which does not participate in Las Llamadas or carnival.

“The black (Uruguayan) has lost a place to express his heritage,” Chirimini, 84, told AFP, referring to what he perceives as a creeping commercialization and watering-down of AfroUruguayan culture.

But “the fundamental thing is… to be aware of what you are representing when you pick up a drum,” he told AFP.

“You are representing many people who came before and who spilled their blood so that today we can walk on the street” drumming, he said.