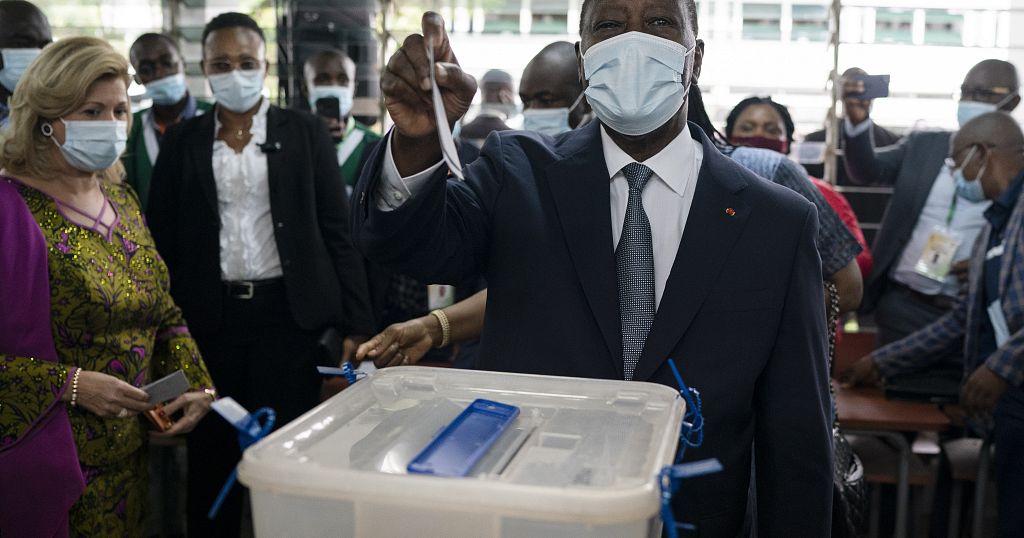 Ivory Coast’s incumbent president Alassane Ouattara has cast his ballot in the presidential election he hopes will grant him a third mandate.

He and his wife Dominique voted in the upmarket Abidjan suburb of Cocody on Saturday morning.

The former IMF official has been in power since 2010.

The 78-year-old is facing off with veteran opposition leader Henri Konan Bedie, who along with rival Pascal Affi N’Guessan, has called for an election boycott over Ouattara’s plan to run again.

The incumbent president on Saturday called on his opponents to renounce civil disobedience.

“I appeal to those who launched this slogan for civil disobedience which has led to deaths: Stop. Ivory Coast needs peace,” Ouattara said after he voted in Abidjan.

“I urge young people not to let themselves be manipulated.”

Abidjan was calm, but protesters blocked the main route to the north, near the central town of Djebonoua, 350 kilometres (220 miles) from the economic capital, local residents said.

Groups of youths also set up makeshift barricades in some neighbourhoods in and around Daoukro, stronghold of opposition leader Bedie, an AFP correspondent at the scene said.

“We got up very early to put up barricades to stop the election and respect the boycott,” said one youth Jean, standing at a blockade of tree branches.

He was supposed to step down and vowed to hand over power to the next generation but the sudden death of his chosen successor in July forced a change in plan.

Ouattara says he can run again under a new constitution approved in 2016, despite a two-term presidential limit.

Ouattara’s supporters expect a strong win, touting his record in bringing infrastructure projects, economic growth and stability to the world’s top cocoa producer after a decade of instability.

His decision to run again has led to street clashes that have killed 30 people and revived the memories of the 2010 vote that Ouattara won but unleashed a wave of violence that killed 3,000 people when his predecessor Laurent Gbagbo refused to step down.

Nigeria massacre: number shoots up to at least 110