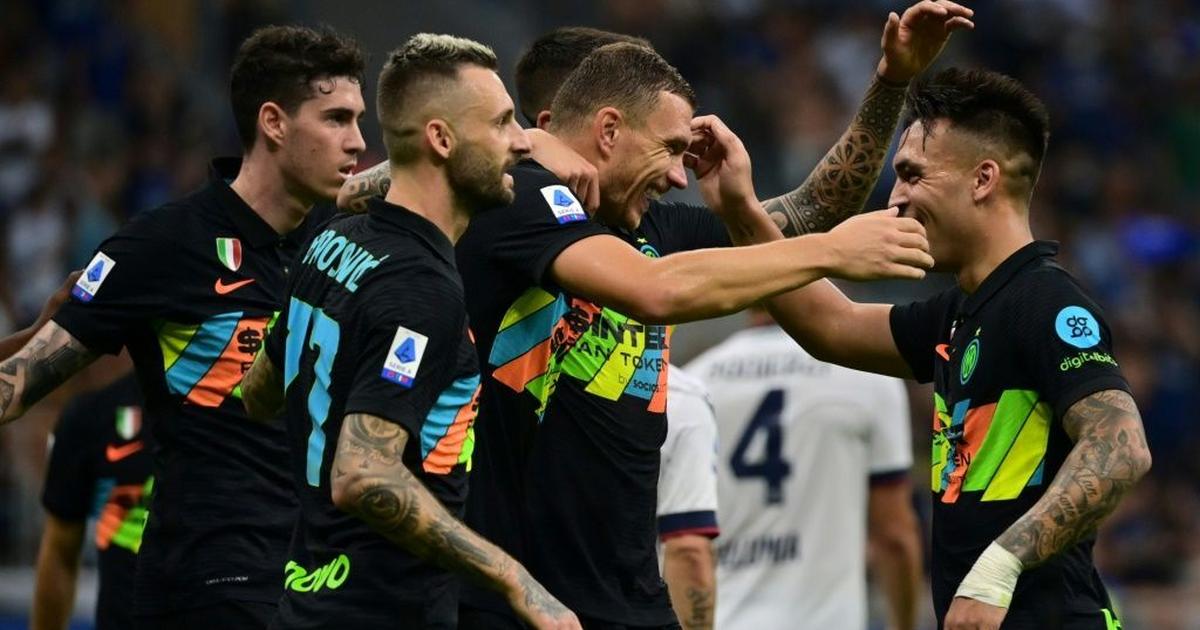 Simone Inzaghi’s side were sucker-punched in the last minute by Real Madrid in Wednesday’s single-goal defeat but made no mistake this time at the San Siro.

They are a point ahead of Roma, AC Milan, Napoli and Fiorentina following a thumping win which came thanks to goals from Lautaro Martinez, Milan Skriniar, Nicolo Barella, and Matias Vecino and a brace from Edin Dzeko.

Bologna sit eighth on seven points after their first defeat of the season, made no better by Arthur Theate’s late consolation goal.

“I was worried about this match because after a game like the one with Madrid, in which we definitely deserved more, there was a bit of worry (for the reaction),” said Inzaghi to DAZN.

“But the boys approached the game in the best way possible.”

Denzel Dumfries made an almost instant impact on his first Inter start since signing from PSV Eindhoven last month, replacing Achraf Hakimi who moved to Paris Saint-Germain, as Inter ran riot in front of their delighted fans on a beautiful evening in Milan.

The Netherlands wing-back, who scored twice at Euro 2020 and was a highlight for the disappointing Dutch, laid on Martinez’s opener and caused havoc down the right flank throughout the match.

“I’m very happy. I think it was a good game from us, after the defeat of Real Madrid we needed to bounce back and we did a very good job as a team,” said Dumfries to DAZN.

“I feel good, my teammates gave me a warm welcome and helped me a lot so I’m happy to be here.”

Just five minutes had passed when Dumfries burst down the right and rolled an inviting low cross from which Argentina forward Martinez could not miss.

Skriniar headed home the second from Federico Dimarco’s corner on the half-hour and Barella made it three four minutes later following another charge and low cross from Dumfries.

And a comfortable win turned into a rout once Vecino tapped home from Academy product Dimarco’s low cross which evaded Dzeko and Dumfries in the 59th minute.

Four minutes later Dzeko did get his reward for an impressive display when he poked home the fifth before bagging his third Inter goal five minutes later, roofing a powerful finish past Lukasz Skorupski from a tight angle.

Duvan Zapata fired Atalanta to a hard-fought 1-0 win at Salernitana, who gave former France forward Franck Ribery his first start of the season.

Colombian Zapata used all his strength and poise to spin and fire home the winner with 15 minutes remaining, inflicting a harsh defeat on Salernitana who played well in front of their passionate fans and twice struck the woodwork through Mamadou Coulibaly and Joel Obi.

However the southern side, whose coach Fabrizio Castori subbed a Ribery who was lacking match fitness at half-time, remain rooted to the bottom of the table with no points while Atalanta move up to seventh, three points behind Inter.

Earlier on Saturday Fiorentina continued their strong start to the season with a 2-1 win at Genoa which briefly moved them level with Serie A’s leading teams.

Riccardo Saponara’s beautifully struck opener on the hour and a Giacomo Bonaventura goal a minute from the end were enough for Vincenzo Italiano’s fifth-placed team to run out winners for the third match in a row.

They host Inter on Tuesday in what promises to be an intriguing match against two well-balanced teams defying pre-season expectations.

Genoa, who pulled one back from the spot deep in stoppage time through Domenico Criscito, sit 14th with three points after their third defeat of the season.